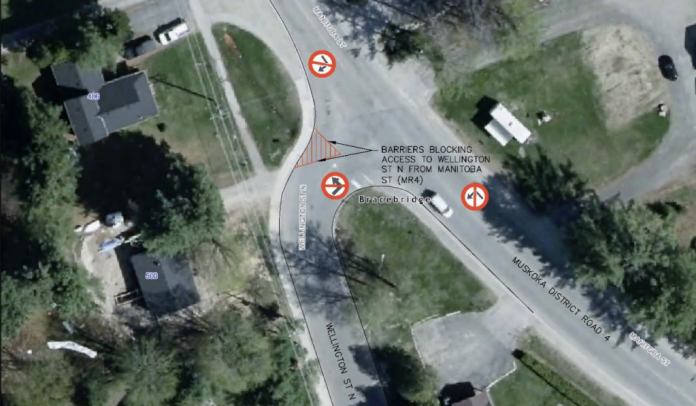 The Town of Bracebridge trial traffic calming improvement project on Wellington Street North will be completed as of Friday, September 10, 2021. The intent of the closure was to reduce the amount of cut through traffic being generated and to provide traffic flows for residents in the area. The closure will begin to be removed during the week of September 13-17, 2021 as the project timeframe is concluding, staff have been able to collect associated traffic data, and for the preparation of winter operations.

In 2020, Public Works Department staff completed a traffic study of the Wellington Street North corridor to review ongoing concerns with traffic movements related to speed, stop control disobedience, traffic volumes and truck traffic. The data collection took place over separate date ranges from June to November 2020 and through two (2) different electronic collection devices. The review of the traffic data determined that the increased traffic flows on Wellington Street North were from cut through traffic, which can be defined as traffic that utilizes other roadways to bypass other roads, traffic congestion or as short cuts.

The data revealed a direct correlation between southbound traffic and volume during the day periods where the data was collected. These counts are significantly higher than correlating northbound traffic, concluding that the increased traffic flow is related to cut through traffic.