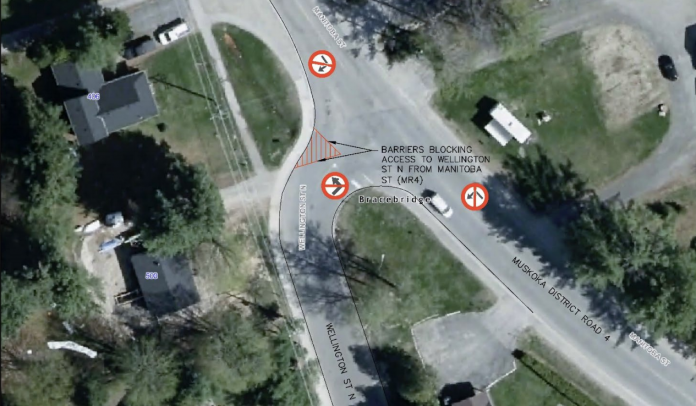 The Town of Bracebridge is implementing a trial traffic calming improvement project on Wellington Street North from Tuesday, July 6, 2021 to Thursday, September 30, 2021. The intent of this closure is to reduce the amount of cut through traffic being generated and to provide traffic flows for residents in the area.

The review of the traffic data determined that the increased traffic flows on Wellington Street North were from cut through traffic, which can be defined as traffic that utilizes other roadways to bypass other roads, traffic congestion or as short cuts. The data shows a direct correlation between southbound traffic and volume during the day periods where the data was collected. These counts are significantly higher than correlating northbound traffic, concluding that the increased traffic flow is related to cut through traffic.

As a result, Town staff are initiating a trial traffic calming improvement project which will include the closing of the north end of Wellington Street North, eliminating southbound movements from Manitoba Street (Muskoka Road 4) and providing right-hand only exit turning movements from Wellington Street North. A visual representation of the set up and closure is attached in Appendix “A”. The closure will utilize traffic delineators at the intersection of Manitoba Street (Muskoka Road 4) and Wellington Street North to delineate traffic. Additional signage will be placed in advance of the closure to provide notice to the motoring public.

Staff will monitor the results of the traffic calming and continue to take input from citizens. Should the trial project be deemed successful in changing driver expectations and experience in a positive manner, without negatively impacting neighbouring local roadways, the closure will be made permanent.