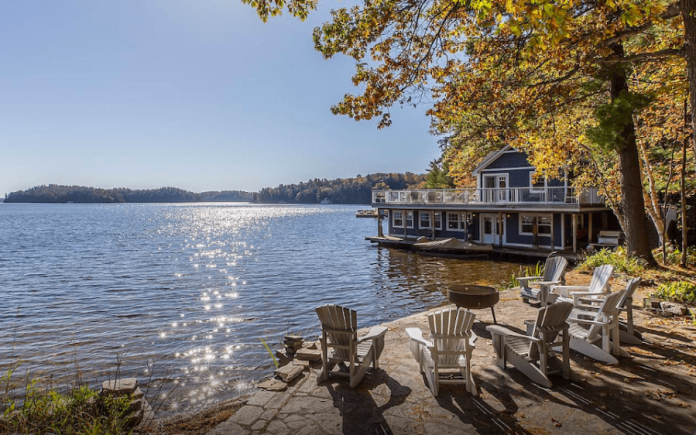 Guests Gone Wild: The Cottage Country Edition — but instead of drunken antics, cottagers are high on rage.

A recent Guardian article exposed the result of lockdown-weary Britons unleashed into the countryside for holiday: bad behaviour, unreasonable demands, and traumatized service staff quitting their jobs. Adding insult to injury, these visitors left terrible reviews in their wake.

The article was emailed to Maryrose Coleman, co-founder and vice president of Muskoka District Rentals, by her daughter living in London. It immediately rang true — Coleman’s been living this new reality for two years now. The company manages luxury cottage rentals, a mostly upscale market but with some family-friendly options as well.

“It’s challenging because we were dealing with a lot of people who were renting that would ordinarily travel and couldn’t,” Coleman says. “And they weren’t used to cottaging. And so there was a different expectation. You know, they didn’t understand that at nine o’clock at night on a Saturday, it might be difficult for us to run something out to them. We tried to accommodate as best we can, but you know, it’s not a hotel.”

Fussy guests might be expected in a high-end market but this is different, Coleman says: “People are just mean this year.”

One client demanded a new washer and dryer delivered to their property because they felt the appliances onsite weren’t large enough. Legal threats are suddenly a thing; guests want to stay for the full visit but have their money refunded, or they will sue. Cleaning staff or property maintenance personnel are facing verbal abuse — facing shouting, thrown linen, and being berated for issues outside their responsibility.

“I had one of my housekeepers in tears,” Coleman says. “The cleaner came out to speak to me and she burst into tears again. People were just so mean to her. In her own words she said, ‘You know I’ve worked for lots of people, and I’ve worked for lots of rich people, but people never treated me this way.’ And I don’t tolerate that kind of behaviour from anyone — human beings deserve to be treated with respect.”

Chloe Verner, manager of client services, works alongside Coleman in a client-facing role. Some guest complaints reach dramatic heights comparable to a “Shakespearean soliloquy,” she says.

Verner even witnessed a customer at the local Starbucks raging over the texture of coconut milk in their drink — it was curdling a little bit, which is normal for coconut milk, she says.

“I feel bad for the staff there, honestly,” Verner says. “I was like, I’ve been getting flack all summer. And now you guys are clearly getting it.”

It’s not all bad news: one recent happy ending involved a lost engagement ring found and returned by another guest. And some clients are always pleasant to deal with, Coleman says. Plus she’s sympathetic to the families expecting the post-pandemic vacation of a lifetime.

“Once you start unpacking what they’re talking about, you realize what’s probably happening is that they’re unhappy,” she says. “And they thought this was the trip that was going to save their marriage or make their kids love them more — whatever it might be. They take it out on us.”

“If there’s a customer service failure on our part, we deal with it,” she adds. “This is different. It’s almost as though people are so bent and frustrated by the pandemic.”

Verner says the informal chatter in the industry — she has acquaintances working in the Niagara tourism industry — is that pandemic guests are much more challenging.

“We’re all a little shell shocked that a global pandemic just suddenly reared its head,” Verner says. “But everybody that’s working in the service industry has been working the entire time. And they just hope that people kind of treat them like a human, to be perfectly honest.”

“We’re not frontline workers and hospitals, we’re not looking for that kind of sympathy,” Coleman says. “But we have been working crazy hours with reduced staff and just trying to do our best. And a little bit of human kindness goes a long way.”