Of all the industries affected by COVID, the music industry has been devastated.

Canadian musicians perform an average of 96 times a year, according to a survey from Music Canada, which generates revenue that helps support an average of 11.5 other people such as bandmates and touring staff. The loss of live music has severely impacted the livelihood of Canadians artists, and in turn, one in four arts workers lost their jobs in 2020, according to Statistics Canada. Dozens of venues across the province have closed their doors while others struggle to stick around as the return of live music continues to be plagued by uncertainty.

Despite the debilitating impact of the pandemic, musicians across Muskoka are working to keep the magic of music alive.

“It was actually an eerie night because we weren’t quite sure if we should be doing it,” Hutt said. “They ended up closing down the lounge early that night, and I was supposed to perform a few more times that month.”

Securing a regular gig during the slow winter months was an encouraging development in Hutt’s career, but after that night, all touring was put on hold. She considers herself a performer more than anything else, so losing the experience of sharing live music with an audience is difficult, though it has given her more time to spend in nature, writing and reflecting.

“I’m not focusing as much on hustling and bustling to the next gig and trying to get gigs, and so it’s given me a lot more time to focus on songwriting,” she said. “I’ve been working on an album, so it’s given me time to do that.”

Given the limitations of the pandemic, Hutt’s in no rush with her new music, so she’s trying to really enjoy the process of releasing the album. In the meantime, she plans to continue doing virtual performances and collaborating with Bet Smith & The Currie Brothers, a Gravenhurst-based group that worked with Hutt to record her recent track “Fifteen Shades.”

The collaboration got the attention of other people in the music industry, Hutt said, opening up doors for future projects. As she continues to adjust to pandemic limitations, Hutt is still working to address a major issue brought on by cancelled concerts: how to connect with her listeners.

“It’s been a little difficult because usually performing live, it’s just such a different atmosphere because you’re in it,” Hutt said. “It just goes back to the energy and really grabbing the audience and being able to speak a little bit in between songs. I find I’m still trying to figure that part out.”

Singer and fiddler Miranda Mulholland shares Hutt’s struggle with virtual concerts. Live streaming a performance is more anxiety inducing than playing for a fully packed arena, she said, particularly because it lacks the back and forth with an in-person audience.

“You don’t get that energy back, which is really why I do it,” Mulholland said. “The feeling, that energy from the audience, feeling as if we’re all sharing something that can never happen again.”

The value of collective cultural experiences

Creating a collective experience is what inspired Mulholland to found the Muskoka Music Festival, formerly known as the Sawdust City Music Festival, in 2017. The event was rebranded shortly after the third annual festival in 2019, which is likely the last full in-person iteration of the event until COVID vaccines are fully administered to the public.

“The planning for a festival starts the day after it finishes, so that’s been hard to not know what to do this year,” Mulholland said. “Obviously, we won’t be the same really until probably 2022 when we can have the full manifestation of what we want the festival to be, but I still have something up my sleeve for this year.”

Along with offering a shared cultural experience, the festival is important to Mulholland because it allows her to pay other artists. Last year, the festival adjusted to event limitations by commissioning music videos from Canadian artists, which were shown at the Muskoka Drive-In throughout the summer, while also offering a songwriting workshop and contest.

Mulholland was impressed by the number of quality song submissions from professional musicians and amateurs alike, and it’s just another way the pandemic has highlighted the importance of music, she said.

Through the #ForTheLoveOfLive campaign, Mulholland has teamed up with the Canadian Live Music Association to ask Canadians to share photos of their favourite memories in music, making sure to tag the venue as well as the artists. Getting back to normal in the music industry will be a long road, she said, and it’s both a marathon and a sprint for the people involved, making the memorable moments of Canadians that much more important.

“We’ve seen Canadians and people all around the world really turn to music as being a solace and an inspiration and something to dance to or cry to,” Mulholland said. “That is a really beautiful thing, just seeing the value of music.”

A major aspect of Mulholland’s career has been advocacy, and the pandemic has only grown that part of her work. She acts as chair of the advisory council for Music Canada, a non-profit trade organization that represents the interests of the recording industry and its artists, while also acting as vice chair of the board of governors for Massey Hall and Roy Thomson Hall. As a festival founder, owner of a record label and a Juno-nominated musician, Mulholland sees the industry through many lenses.

Through her advocacy efforts, Mulholland works to get artists connected with various streams of revenue while also speaking to issues like copyright and compensation in government deliberations and other settings. When the Canada Emergency Response Benefit (CERB) first rolled out, Mulholland was part of the working group that helped ensure musicians could qualify for support. As closures and lockdowns continue on, that government support will be all the more important.

“When we get the all clear to go, it can’t come back in that same immediate way,” Mulholland said. “It’s not like we can just open our shop and be open. Tours and festivals and events, this requires so much planning and so much time. For governments, it’ll just be hoping to get support until we can meaningfully go back to work.”

Conduits for culture: The role of venues

Peter and Michelle Swanek, owners of the Gravenhurst-based venue Peter’s Players, are also looking to the government to provide support for the industry. The venue was shut down from March to mid-August last year, taking away their busiest season, before being shut down once again in December. Like many other business owners, the initial dread caused by COVID made them wonder if they should sell the venue and step away, but the passion they felt for the business remained strong.

“We pretty much missed most of our high season because we really rely on a lot of the summer months to kind of float the boat over the whole winter season,” Michelle said. “That being said, we were only able to open back up towards the end of August and we were only operating with maybe 25 per cent capacity, so that was a real challenge for us and the artists.”

The venue received a $10,000 grant from the Canadian Chamber of Commerce in June 2020, and while the money has helped them stay afloat, it hasn’t been enough to cover the full impact of the closures. Because so many grants for the arts target non-profits, the venue owners turned to their fans with a Brick in the Wall campaign to help them cover increased costs for things like insurance while also funding new equipment to help them live stream shows.

“As a venue owner, we’re not just like the artist or a music promoter,” Michelle said. “Those hard costs of the building don’t go away even though the venue’s not open, so just reaching out to our own audience and them responding as generously and heartfelt as they have over the past year, it’s just showed us how important we are to the community.”

Local venues are important not only as individual businesses, Michelle said, but also as platforms for new artists. Singer-songwriter Serena Ryder played Peter’s stage early on in her career, and Michelle worries that without small venues like theirs, some great musicians may never get the chance to start their careers.

In addition to fostering new talent, venues also give established artists a way to express themselves and heal, which is even more pertinent given the stress brought on by COVID, Peter said. The first artist they had at Peter’s Players following the initial closure expressed the feeling well.

“He got on stage and he just looked at the room with his guitar in his lap and said, ‘This is just like breathing again,’” Peter said. “They need to play. They’re musicians and we’re a stage, so we’re like a conduit to get it to the people.”

For now, they’re purchasing cameras and other equipment to live stream shows, though they’re still trying to find ways to generate revenue through the virtual concerts. They plan to host shows with a small, COVID-safe studio audience until they’re able to host outdoor concerts in warmer weather.

The venue is waiting on the approval from the town to allow them to use their front lot for the eventual outdoor concerts. Once approved, they plan to sort out some temporary fencing, seating and staging to complete the space, which they hope will help local musicians and music fans start on a path toward healing and recovery.

“We’re all going to have to gather together around a nice fire, which is culture, so that we can get through to the other side of this because we’re in the joy business,” Peter said. “People want to get out and have joy, but they’re scared.”

Every show at their venue makes people feel elated and forget about everything except the current moment, Peter said, which is more important than ever before. He hopes that once they acquire the gear and start live streaming shows they’ll be able to capture the unique vibe of Peter’s Players and bring it into peoples’ homes, starting with a show from Jim Cuddy in April.

“The artist needs to collect that energy from the audience in order to continue to create,” Peter said. “Somehow it’s going to have to happen with cameras for us, so that we can get it into living rooms, so that the artists can somehow collect some revenue.”

For tips on supporting the music industry, see the graphic below, and listen to our playlist of local artists to hear the music of Muskoka. 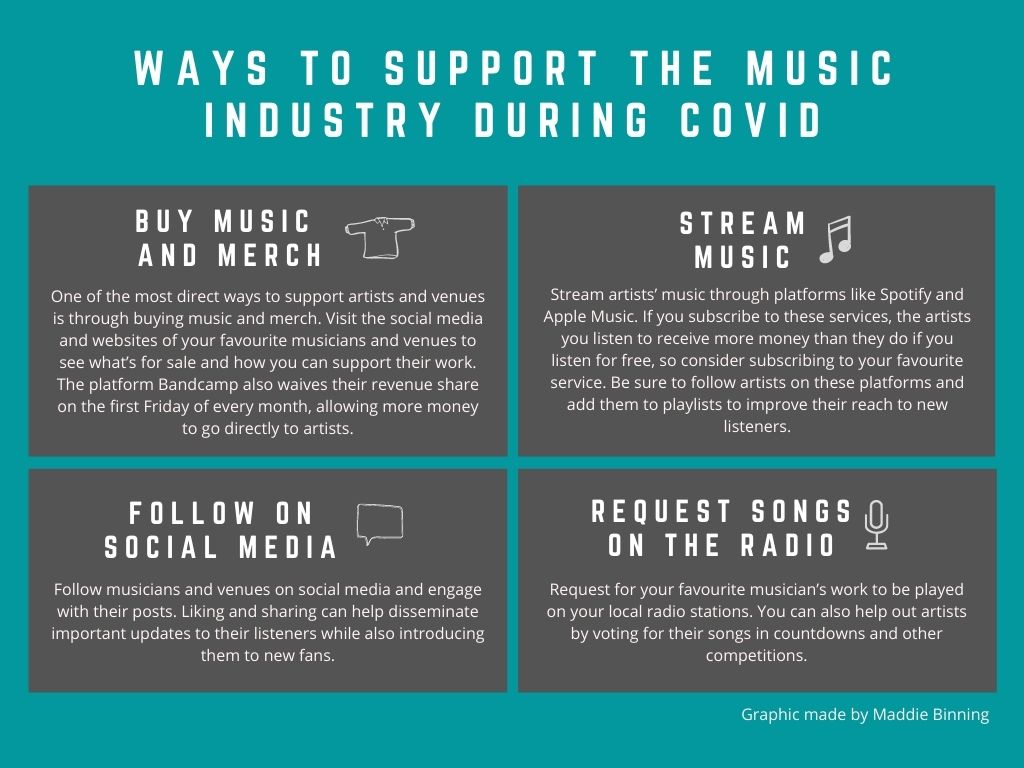