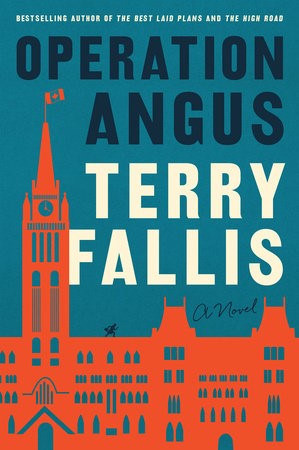 Join Muskoka Authors Association on Thursday, October 13, as they welcome guest speaker and best-selling author, Terry Fallis. Fallis will discuss the creation of his most recent novel, Operation Angus and hold a Q & A on the business of writing and promotion.

In Operation Angus, the author resurrects his character, Angus McLintock, an accidental Member of Parliament who has won re-election and now sits as the Minister of State for International Relations.  In his new position, he receives a cryptic, late-night text directing him to a pub in London. Angus is instructed that the meeting must be kept secret as must the source of the information – an M16 agent. What follows for Angus and his Chief of Staff, Daniel Addison, is a madcap cloak-and-dagger adventure filled with humour and heart.

Terry Fallis is a Canadian writer and public relations consultant. He is a two-time winner of the Stephen Leacock Memorial Medal for Humour, winning in 2008 for his debut novel The Best Laid Plans that was later adapted as a six-part CBC-Television miniseries, as well as a stage musical and in 2015 for No Relation, an award for which five of his published novels to date have been shortlisted. The High Road was a Leacock Medal finalist in 2011. Up and Down was the winner of the 2013 Ontario Library Association Evergreen Award and was a finalist for the 2013 Leacock Medal. His fifth, Poles Apart, hit bookstores in October 2015, was a Globe and Mail bestseller and was a finalist for the 2016 Leacock Medal. One Brother Shy was released in May 2017 and became an instant bestseller. The Canadian Booksellers Association named Terry Fallis the winner of the 2013 Libris Award as Author of the Year. He is the author of eight best-selling novels.

For more information and to register, visit Eventbrite or visit MuskokaAuthors.ca and click on UPCOMING EVENTS or call David Bruce Patterson at 705-801-8074.

After you register for this event, you will be sent a link to the ZOOM event via email.