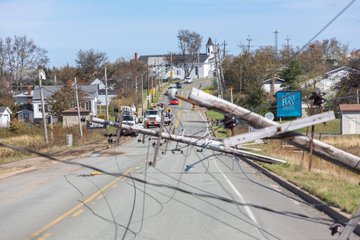 Hydro One today announced that it is sending more than 30 employees to help restore power following the devastating effects of post-tropical storm Fiona in Atlantic Canada. The storm has caused mass destruction, widespread power outages, coastal flooding and dangerous driving conditions. It is estimated that more than 400,000 in Nova Scotia lost power due to the storm.

“Fiona brought with it heavy rainfall, severe winds and historic damage. Our thoughts are with our fellow Canadians in the east affected by this catastrophic storm,” said David Lebeter, Chief Operating Officer, Hydro One. “Our highly skilled storm responders have a long, award-winning history of restoring power during times of crisis. We are proud to answer the call and send our crews to help others during their time of need.”

“I want to thank Hydro One and its employees for stepping up to support Atlantic Canada in the aftermath of Fiona,” said Jonathan Wilkinson, Canada’s Minister of Natural Resources. “These workers will restore power in affected communities, helping Nova Scotians get back on their feet in the days and weeks ahead.”

“My thoughts are with everyone impacted by the post-tropical storm,” said Todd Smith, Minister of Energy, Province of Ontario. “Ontario’s frontline hydro crews are always ready to help, and I want to thank the brave, hardworking Hydro One employees on their way to Nova Scotia to assist with restoration efforts.”

Hydro One’s hardworking and dedicated employees are trained to work in emergency situations on both transmission and distribution systems. The company will send approximately 30 power line workers to help Nova Scotia Power with the restoration efforts near Truro, Nova Scotia. Crews are expected to reach the affected areas by Tuesday evening.

As part of the North Atlantic Mutual Assistance Group, Hydro One has reciprocal agreements in place with North American utilities to provide assistance during significant power outages. In these mutual assistance situations, all costs are covered by the utilities receiving help.

Hydro One has received 12 emergency response awards from the Edison Electric Institute for its storm recovery efforts, including our restoration work following Hurricane Irma in 2017 and the devastating nor’easter storms Riley and Quinn in 2018.