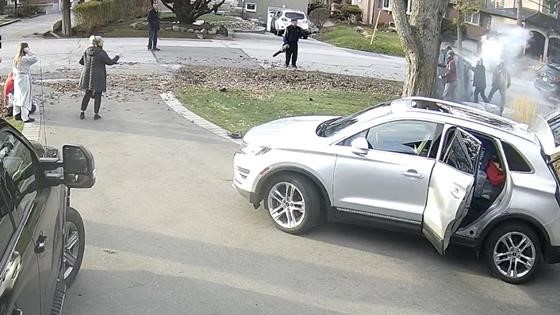 On Sunday December 4, 2022, Linda Hart Mulgrew, a long-standing Canadian Red Cross First Aid Instructor Trainer for Heart to Heart First Aid CPR Services Inc. was at home getting ready for work. As she was just about to leave, a car suddenly crashes in front of her house. The entire incident was captured on CCTV video. The speeding car hit the curb and rolled several times before crashing at 9:41am.

The driver escapes the vehicle from the passenger side window. The car immediately starts to smoke, getting worse with each passing second. After taking a few steps, the driver falls to the ground. It is clear he is in shock. CCTV video shows Linda grabbing an emergency blanket from her car. She places it over the person to treat for shock as she moves the person away from the dangerously smoking car.

Linda performs a “primary survey” and checks the person for any life-threatening conditions. This is known as the ABCs in first aid (airway, breathing and circulation). She then conducts a “secondary survey” and assesses the person for any injuries such as fractures or any injury to the head, neck or back. Luckily the driver was wearing a seatbelt. Without it, he could have suffered a severe spinal cord injury or even died.

Bystanders started to gather around the scene. One bystander stayed with the injured person while Linda ran inside her home to get a first aid kit. During this time, bystanders begin to crowd around the smoking vehicle. Following the crash, the driver did not turn off the ignition and the engine was still running. The bystanders attempted to roll the car over to turn the ignition off. Upon Linda’s return to the scene, she immediately instructed they bystanders to stay back and allow for EMS to do it. Everyone listened and moved back. Linda continued first aid by immobilizing the person’s injuries and controlling bleeding with dressings and bandages to the person’s scalp and hand.

Seven minutes later the police arrive on scene and four minutes after that a fire truck arrives. The fire fighter took over and Linda’s duty as a first aider was done. She provided the fire fighter with a “first aider’s report” on what she saw and the type of care she provided. With an official handover to EMS, Linda leaves the scene. The video shows her properly removing her gloves to avoid contact with the person’s blood as she walks away.

After watching the CCTV video of Linda’s rescue, Nick Rondinelli, CEO of Heart to Heart First Aid CPR Services said “Linda’s quick thinking, training and first aid kit came in handy that day. As a Canadian Red Cross First Aid Instructor for over two decades, it is not surprising that Linda performed exceptional first aid and emergency response. She managed the scene very well and kept everyone safe. We couldn’t be prouder.”

“As such, Heart to Heart CPR is hereby nominating Linda Hart Mulgrew to receive the The Canadian Red Cross Rescuer Award,” said Rondinelli.

The annual Rescuer Award proudly recognizes the astonishing acts of everyday heroism, demonstrated by ordinary citizens (non-professional rescuers), or off-duty first responders who have volunteered assistance to help save a life, prevented further injury and/or provided comfort to the ill or injured person.

Nick Rondinelli, owner and CEO of Heart2Heart CPR was also awarded the Rescuer Award in 2019 along with his instructor John Devlin. This came after Nick and John provided first aid to a person on a scooter who was hit head-on by a vehicle in front of Heart to Heart’s head office at 216 Carlton Street in downtown Toronto. The entire incident was also caught on a CCTV.

The video that captured Linda’s rescue after the sudden and unexpected car crash in front of her home, shows the power of training and being prepared for emergencies. It also goes to show that anyone can be called to suddenly act in an emergency, whether it be at home, work or in the community. Getting trained in first aid, CPR and having a first aid kit is something that everyone should take seriously. Contact Heart2Heart CPR for training courses in your area by visiting their website www.heart2heartcpr.com. Alternatively, you can contact your local first aid training provider and get trained and equipped today!

Join The Board Of Directors At The Muskoka Lakes Museum

Join The Board Of Directors At The Muskoka Lakes Museum