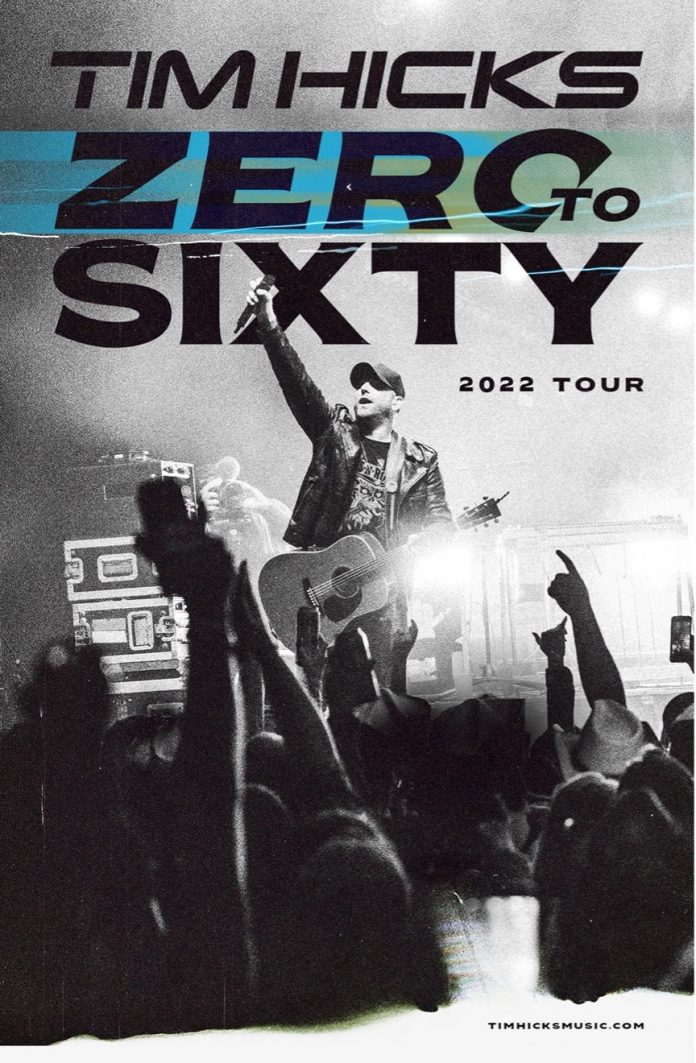 Country singer-songwriter Tim Hicks got to know Muskoka in part by playing local pubs and other venues early on in his career, and now he’s making his way back for a show at the Kee to Bala on July 30.

Hicks is an Ontario native who released his debut album in 2013. Since then, he’s racked up 18 Top 10 radio hits including “Get By”, “No Truck Song” and “What A Song Should Do”. He kicked off his Zero to Sixty tour with stops in Calgary and Winnipeg earlier this month, and next up is his show at the Kee. After more than two years of closures and restrictions, he didn’t know what it would be like to reunite with fans at concerts, but so far, he said the crowds have been high energy and the shows have been fantastic.

“I’ve been playing in bands since I was seven years old,” Hicks said. “I’ve never gone so long without singing before, so it’s really great to be back at it.”

Hicks’ grandparents lived in Muskoka and he still has family in Huntsville, so he’s spent more than just the occasional summer trip in cottage country. His stop in the region will be fairly quick this time around, but he hopes to spend some time with his dad and get a line in the water before he moves on to Saskatchewan for a show on August 5.

Early on in his career, he played many pubs and other gigs across Muskoka with On The Docks acting as a regular stop for him. He’s excited to be back with his band this summer for another show at the Kee.

“The Kee to Bala is a legendary spot to play,” Hicks said. “It’s a little bit of a feather in your cap for performing [given] all the people that have played there over the years, and so I’m really proud to be part of that history now.”

Though the Kee may be smaller than venues like the Commodore Ballroom in Vancouver or Danforth Music Hall in Toronto, it doesn’t feel like it, Hicks said. The energy of playing there is similar to big city venues, but it also has a sort of character unique to the Kee.

“It’s definitely a highlight of the summer for us and we’re really looking forward to getting back there,” he said. “We’ve had some epic shows there in the past, and there’s a vibe at the Kee that there isn’t anywhere else. It has its own unique feel.”

Mike Strong, owner of the Kee to Bala, said that artists like Hicks are what makes the venue so special. He’s excited to be opening the doors to the Kee again this year and bringing people together through music once again.

“The Kee obviously has got a long standing reputation for being a home for Canadian music in the summers,” Strong said. “It’s all made possible with some of the great artists over the years, guys like Tim, that have come through and made it a bit of a residency every summer and get their fans circling dates on the calendar months out.”

This summer has been like a reunion at the Kee as they see the familiar faces of Canadian artists returning to perform, Strong said. Hicks and his band always put on a good show, complete with big energy and lots of cowboy boots, so the team at the Kee is looking forward to welcoming them back for the August long weekend.

Shows at the Kee regularly sell out; in fact, Strong said they have a handful of faithful fans that buy a batch of tickets for every show. Hicks’ show is no different and the VIP tickets have already sold out, so he encourages anyone with interest to buy tickets while they still can.

“We’re probably down to our last few stacks of tickets there. VIP certainly has been selling first and foremost this year,” Strong said. “There still are some tickets left to the show, but this will sell out. No doubt.”

About halfway through the tour on Sept. 2, Hicks is releasing his new album Talk to Time. He said he had a playlist of 88 songs that was whittled down to 10 tracks for the album, and it’s unique for a few reasons. For one, Hicks usually writes all of his own material, but his team found two outside songs that made it onto the tracklist.

Another special feature of the album is that several songs were recorded from a distance. Hicks performed the songs at his home studio in St. Catharines while a program called Audiomovers connected him to his producer in Nashville, who happens to be Bracebridge native Deric Ruttan.

“He’s been down in Nashville since ‘94 and we tapped into him to produce this time around just to  see where it would go, and we had a really great time doing it,” Hicks said. “You can imagine after two and a half years of crafting the record, I’m ready to get it out and I’m really proud of it.”

Fans can expect to hear “The Good, The Bad And The Pretty”, “Whiskey Does” and “Dodge Out Of Hell” from his upcoming album. There could be another new tune or two, but Hicks and his band want to make sure they include a balance between recent releases and well-loved classics, he said.

No matter what songs end up on the setlist, one thing they know for sure is that it’s always a good time at the Kee.

“I’m just super excited to be back out and I really can’t wait to see all those smiling faces,” Hicks said. “Singing into your iPhone isn’t the same as standing in front of a crowd and getting that immediate reaction, so I’m really excited about that.”

For tickets to see Tim Hicks in Muskoka on July 30, visit the Kee to Bala website.