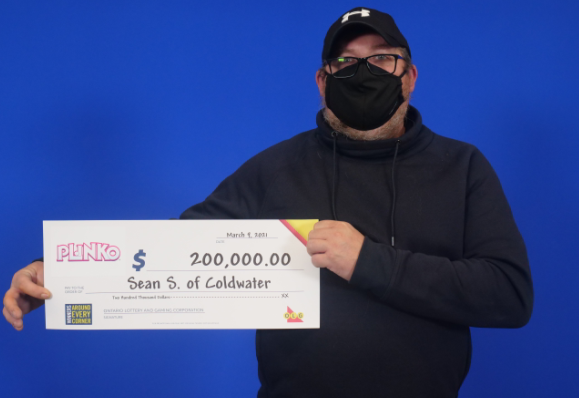 Sean Smith of Coldwater, come on down! Sean lived out a ‘Price is Right’ dream at the OLG Prize Centre in Toronto, dropping a chip on a real PLINKO Board to win $200,000 with the new $5 INSTANT PLINKO.

Sean said he was intrigued to play PLINKO when his son and daughter-in-law won a CHIP prize on their PLINKO ticket.

The 52-year-old said he was in a state of euphoria when he realized what he won. “The anticipation is exciting because I knew I would be going home with at least $100,000!”

Sean said when he saw where the chip landed, he had a sense of relief. “My dad called me after and when I told him what I won he said, ‘Well, that’s a great day at the office!’”

Sean plans to pay some bills and invest his winnings to bring him closer to retirement. “Tonight, I’ll celebrate in my hot tub with my fiancé and a glass of champagne,” he smiled.

The winning ticket was purchased at Jag’s Variety Store on Coldwater Road in Coldwater.