Bracebridge Falls will glow blue this Friday evening, joining 15 landmarks across the country to light up blue for apraxia awareness on May 14.

Childhood apraxia of speech (CAS) is a rare neurological disorder that impacts a person’s ability to speak. Children with CAS often have a good cognition and understanding of language, but they have difficulty learning and performing the complex movements that make up speech. Bracebridge resident Jody Hamilton had never heard of CAS until her son Nash was diagnosed. When he was an infant, he rarely made noise, only crying when he needed to be fed or changed.

“I just thought he was a really well behaved baby,” Jody said. “Then, as he started to get older in between one, one and a half, I started realizing that other kids that I knew his age were starting to talk and babble a lot. And so when we went for our 18-month shots, the doctor asked if he had 20 words and I said, ‘Not even close.’”

They were referred to One Kids Place, a children’s treatment centre that offers a variety of services for children and families with physical, developmental and communication delays and disabilities. Jody got Nash started with speech therapy and other treatment, and at two years and eight months, he was diagnosed with apraxia.

“He was trying to communicate, but he couldn’t communicate with his voice,” Jody said. “He could communicate other ways, so he was very clever. He could point, and if he wanted something, he would come and take you and he’d bring you to it. He was very, very resourceful when it comes to stuff like that compared to [another] kid his age just because he had to be.”

Following his diagnosis, Nash received an augmentative and alternative communication (AAC) device, which allows him to speak through a program on an iPad. He has also learned some sign language to help him communicate as he continues to work on his speech.

Between speech therapy and his other treatment, Nash has made leaps and bounds since he was diagnosed with apraxia, Jody said, but he does have a severe form of the disorder. Now at age five, he has somewhere between 100 and 200 words that he can say clearly. He will likely never speak the way most people do, but that doesn’t stop him from being a thoughtful, active kid with lots of love for the people around him.

“The biggest part is the awareness and the education,” Jody said. “Just letting people know that it’s okay to be different because he’s definitely different, but he is definitely an amazing little guy.”

Brooke Rea, a speech-language pathologist with a concentration in CAS, can attest to that as well. She has devoted much of her career to CAS, acting as a Canadian Ambassador for Apraxia Kids as well as the owner and director of the Childhood Apraxia & Speech Therapy Centre in Guelph. All her patients with apraxia are such hard workers, she said, and having assessed Nash in the past, she knows that’s the case with him as well.

“They are born without the ability to use their own voices to communicate, which is something that you and I and the rest of the world take for granted every single day,” Rea said. “Despite that challenge that they’ve been dealt, they are such happy individuals. They are hard working, they undergo hours and hours and hours of intensive therapy in order to learn to communicate with their own voice, and they’re just so delightful to work with.”

Rea had to forge her own path to become an expert in CAS. Even now, speech pathologists that want to work in apraxia have to do additional professional development when they’re done with school because grad programs often cover very little on CAS, she said. After she finished grad school, Rea started to work with Apraxia Kids, a nonprofit that works to spread apraxia awareness and education.

Working with Apraxia Kids lit a fire in Rea to improve the help provided to children and families affected by CAS. She and her fellow Canadian Ambassadors hope to create a full Canadian branch of the nonprofit, but until then, it’s important to raise awareness so that treatment and funding options can improve.

“One of the things I say to most of my families is that their MPP should know what they’re living with, and most MPPs have never heard of apraxia,” she said. “We need to increase our awareness before we can advocate more successfully, especially in terms of funding.”

Most people have never heard of CAS unless they personally know someone who has it, Rea said, so one of the primary things she wants people to understand about apraxia is that it’s lifelong and often requires extensive treatment.

“Our kids will need intensive therapy as early as possible in their lives, and access to the right therapy is still something that many families struggle with,” she said. “Publicly funded speech therapy doesn’t usually meet the needs of our kids, and many of our families are left to seek services either privately or to go without service if that’s not something they can afford to do, which is still something that’s a major problem for our children with apraxia.”

To learn more about CAS, visit the websites for Apraxia Kids and Child Apraxia Treatment. 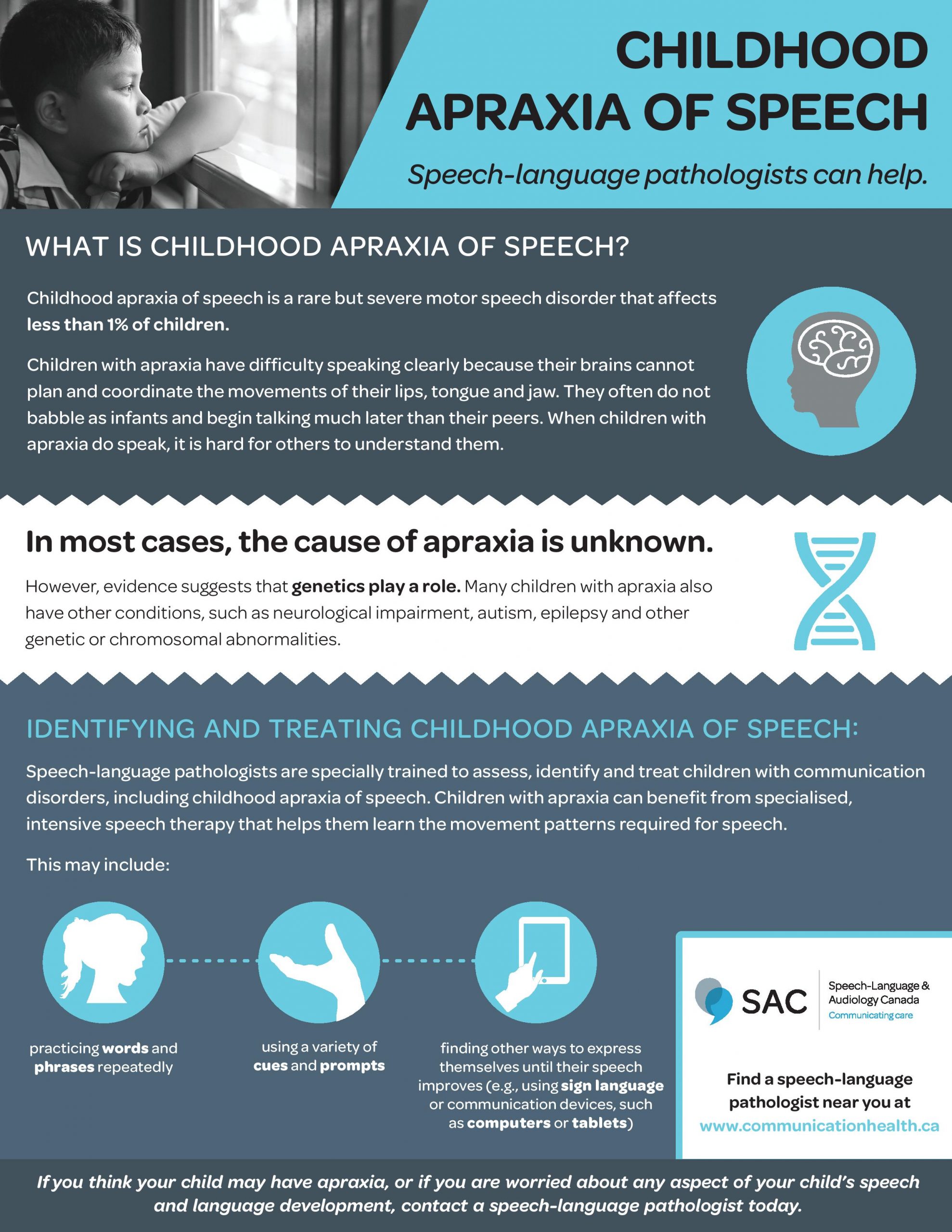