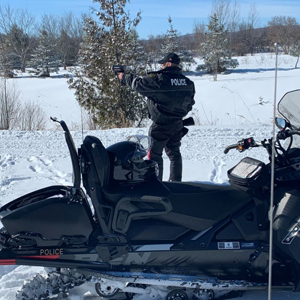 On January 23, 2021 at 1:50 p.m. Southern Georgian Bay OPP officers along with Tiny Township Fire Services and County of Simcoe Paramedics responded to report of a snowmobile that had rolled over on Manitou Circle in Tiny Township. The driver suffered non-life threatening injuries and was transported to Georgian Bay General Hospital for treatment. Investigators later issued the operator of the involved snowmobile an offence notice for failing to wear a helmet.

On January 22, 2021 at 2:48 p.m. Southern Georgian Bay OPP and Simcoe County Paramedics were dispatched to an incident at a Robins Point Road home were it was later determined that an infant was injured as a result of a snowmobile mishap on private property. The infant was treated at Georgian Bay General Hospital and released.