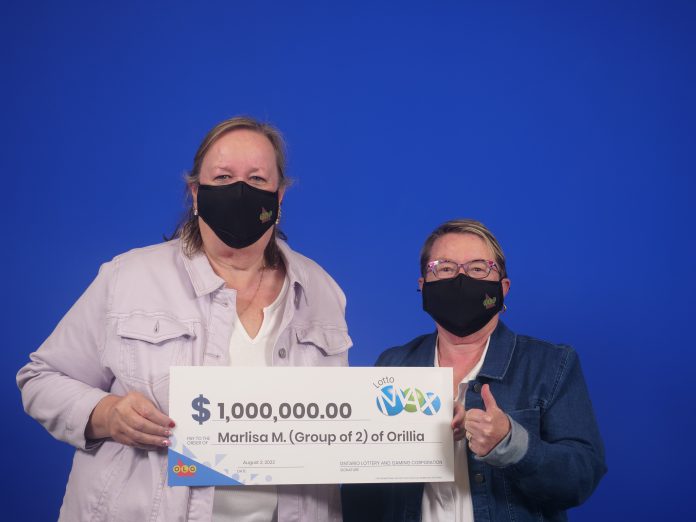 The LOTTO MAX odds have shone in favour of Marlisa Mercer and Joann Macqueen of Orillia! They won a MAXMILLIONS prize worth $1 million in the June 7, 2022 LOTTO MAX draw.

Marlisa and Joann, best friends for over 35 years, play the lottery together when the jackpot is big. “We buy Quick Pick tickets with ENCORE,” Joann shared while at the OLG Prize Centre to pick up their cheque.

Joann says she was at the grocery store buying raspberries when she checked the ticket. “I saw the Big Winner screen but didn’t think we actually won. When the clerk told me OLG was calling, I said, ‘But I have raspberries,’” she laughed. “I was so shaken I brought the grocery cart out to my car for two packs of raspberries. Then I called Marlisa.”

Marlisa said after Joann told her about the win, she suddenly realized how valuable the ticket was. “I told her to go home and lock the door now!” she laughed. “It feels overwhelming and so unbelievable.”

Marlisa is planning some home renovations with her winnings. “I will treat myself to some hardwood floors and landscaping.” And Joann is planning to purchase a new vehicle and share with her family.

They both plan to donate to their local hospice and food bank.

The winning ticket was purchased at Shoppers Drug Mart on Front Street in Orillia.