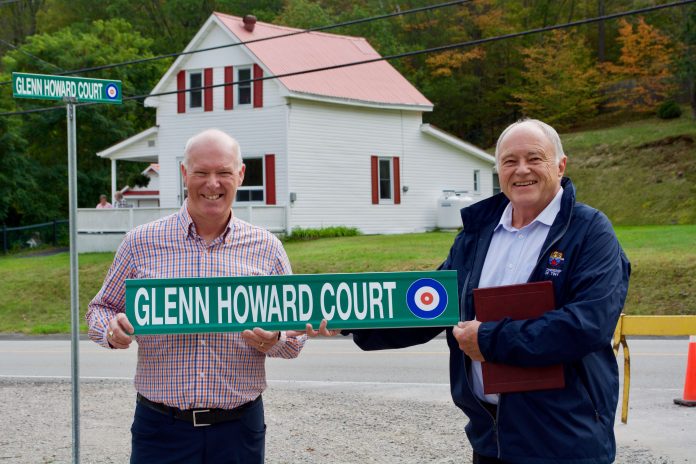 On Wednesday, October 6, 2021, the Township of Tiny held a ribbon-cutting ceremony to celebrate the naming of the new road in the Copeland Creek South Subdivision, located in the Copeland Woods Development on Concession 2. The Township of Tiny is pleased to officially announce the road as “Glenn Howard Court” in honour of Tiny resident Glenn Howard.

“It is my honour to announce the name of the new road as ‘Glenn Howard Court’. By honouring Glenn through the naming of the new road our community can maintain a strong connection to his legacy that will be remembered for years to come” stated Mayor Cornell.

Council approved the name for the new road, after receiving the request from Ted Phelps, the local developer of the Copeland Creek South Subdivision. As per the Township of Tiny’s Road Naming Policy, Mr. Howard met the criterion as he is a prominent Tiny resident, who has contributed to the community through his sports achievements, having won 17 Ontario Provincial Championships, 4 Briers and 4 World Championships making him one of the most globally decorated curlers of all time. His achievements go beyond the curling arena as he has supported the community through various contributions to local charitable causes.