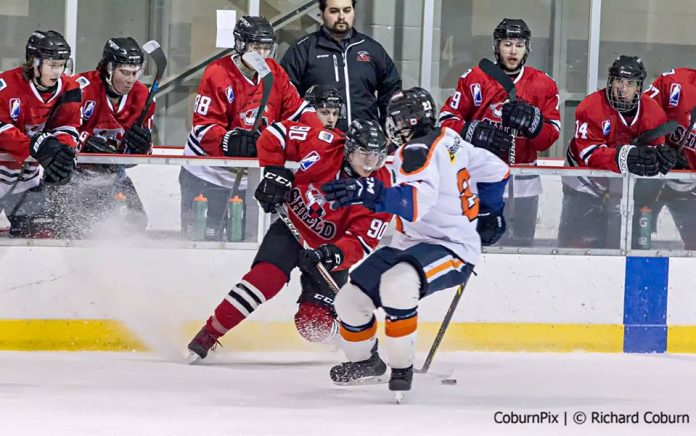 The South Muskoka Shield Jr. A Hockey Club is excited to announce that team officials have come to an agreement with the Town of Gravenhurst and will be returning to the Graeme Murray Arena this fall. The Shield will be entering their 15th season in the Greater Metro Junior ‘A’ Hockey Leauge.

The Shield called Gravenhurst home for 12 seasons from 2006 to 2017, where the club experienced incredible success on and off the ice with 10 winning seasons, three league finals appearances, the 2016 North Division regular season title and a 2009 Russell Cup Title.

The club is excited to be returning to Gravenhurst and cannot wait to see the Graeme Murray Arena packed again on Friday and Saturday nights for Shield home games.

Another change for the Shield this off-season is a change in ownership, as the Empire Hockey Group purchased the Shield at the completion of the 2019-2020 season. The ownership partners of the Empire Hockey Group have a wealth of junior and professional hockey knowledge, over 30 years of junior hockey ownership experience, financial stability and a proven track record of building championship hockey teams.

The Empire Hockey Group has the knowledge and resources to return the Shield to the top of the league standings once again. The first priority after purchasing the club for the Empire Hockey Group was to bring the club back to Gravenhurst. The group knew it was imperative to return the Shield to the state-of-the-art Centennial Centre, where the organization had great success and had received incredible support from the entire Gravenhurst community for 12 seasons.

The Empire Hockey Group is 100 per cent committed to building a contending hockey club and creating a great family atmosphere at the Centennial Centre for all Shield home games. The Shield will be a major part of the Gravenhurst community again and will be very active in volunteering and giving back at the local schools and with many other local organizations.

The Shield would like to announce that longtime Shield head coach and general manager Frank Demasi will continue in these roles with the organization. The ownership group is very excited to have Demasi, the 2014-2015 Greater Metro Hockey League coach of the year, leading the team and know that with additional resources and assistance in recruiting, he will be a major factor in returning the Shield to the top of the standings.

Demasi brings stability, knowledge, discipline and a wealth of experience to the organization. As a player, Demasi was a star forward for Lake Forest College National Collegiate Athletic Association for four seasons, followed by an eight-year professional career in Europe. The Muskoka resident brings nine years of coaching and managing experience at the Jr. A level to the organization, as well as his knowledge and relationships within the community of Gravenhurst.

This is a new chapter for the South Muskoka Shield, who will be entering their 15th season of play this fall. The ownership group of the Shield would like to send our best wishes to everyone in Muskoka during the current COVID-19 crisis: stay home, stay safe, stay healthy and we cannot wait to see you this fall.

For anyone interested in further information on billeting, advertising, season tickets or any other general inquiry, feel free to contact Frank Demasi (head coach/general manager) at frank@shieldhockey.com or Sean Werth (director of hockey operations) at swerth@russellhockey.ca.