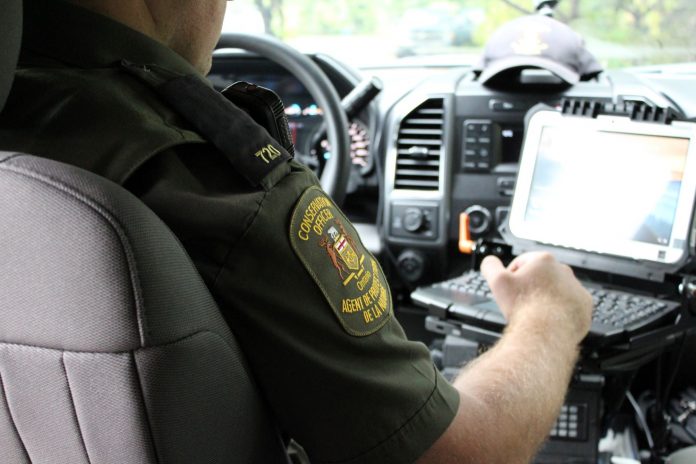 In grad school, I studied the reintroduced elk population on the north shore of Lake Huron and spent months at a time working and living in the area between Blind River, Iron Bridge, and Elliot Lake. Algoma is a paradise for avid outdoor recreationists like me.

One weekend in early January, some friends and I decided to rent a cabin and spend a few days snowmobiling and ice fishing on various secluded lakes. On the drive up to the cabin, our convoy of trucks stopped to watch a small herd of elk in a farm field. A Conservation Officer stopped by to chat on the side of the road. He was a friend of ours and was supposed to join us for the weekend but had to finish off his Friday shift first. Even though we weren’t actively fishing, he asked to check our licences to make sure we all had the required documentation before we headed into the bush. Twelve hours later, he joined us for the rest of the weekend as just another angler. No doubt he just wanted to make sure he wouldn’t be fishing with any potential offenders…

Most every angler, hunter, and trapper has a story about Conservation Officers; some good, some bad. The only reason I tell you this particular story is because it’s the first and only time I’ve ever been checked by a Conservation Officer. Despite fishing for over 30 years and hunting for the last dozen, I’ve only had one ‘official’ interaction with a CO.

Conservation Officers are peace officers under the Criminal Code of Canada and have been working to protect Ontario’s natural resources since the first game warden was hired in 1892. Conservation Officers are subject to extensive training requirements, including being trained to police standards throughBasic Constable Training at the Ontario Police College, use of force training, and annual firearms recertification.They enforce a wide variety of provincial and federal legislation including the Fish & Wildlife Conservation Act, the Fisheries Act, the Public Lands Act, and the Migratory bird hunting regulations. During the pandemic, they have even been called upon to enforce aspects of the Emergency Management and Civil Protection Act and the Reopening Ontario Act. The mission of the Ministry of Natural Resources and Forestry’sEnforcement Branch is “To safeguard the public interest by leading and delivering professional regulatory protection of Ontario’s natural resources”.

In the late 1990’s, there were approximately 280 Conservation Officers in Ontario, including managers, district investigators, enforcement specialists, and training specialists.

Today, that number is less than 200 and only about 160 are front-line, boots-on-the-ground Conservation Officers that an angler or hunter would encounter in the outdoors.

DO WE NEED MORE CONSERVATION OFFICERS?

In short, yes we do. Natural resource enforcement isn’t just about catching offenders in the act. For any enforcement body to be truly effective, enough people need to believe that there is a legitimate possibility of being caught. Obviously, the odds of catching infractions dwindles as the number of Conservation Officers drops. With over 1 million square kilometres to cover, current enforcement capacity is simply insufficient to protect our vast and valuable natural resources.

What’s driving this decline?Obviously, we’re losing Conservation Officers faster than we can hire them, but a specific driver of the loss recently came to light – losing them to other government ministries.

WHAT IS THE OFAH’S ROLE IN THIS CONVERSATION?

The OFAH is a staunch supporter of the work that Ontario’s Conservation Officers do, and we’ve honoured their hard work annually since 2014 with the OFAH Conservation Officer of the Year award. In his response to our 2018 election questionnaire, the then-leader of the PC Party Doug Ford made a clear commitment to increase the number of front-line conservation officers if elected. To date, we have seen very little meaningful progress on this issue.

Ontario has world-class natural resources, and the OFAH will keep reminding Premier Ford and future governments that they deserve protection.

Click here to read a letter we sent on March 25 to the Minister of Natural Resources and Forestry, John Yakabuski, regarding the situation.

OFAH, Manager of Policy
Mark joined the OFAH in 2012 as the Senior Wildlife Biologist and became the Manager of Policy in 2018. He holds Bachelor of Science and Master of Science diplomas from Trent University. Before joining the OFAH, Mark spent 4 years as the Provincial Population Ecologist for Manitoba Conservation. Originally from northeastern Ontario, Mark is an avid hiker, camper, angler, and hunter.
Souce https://www.ofah.org