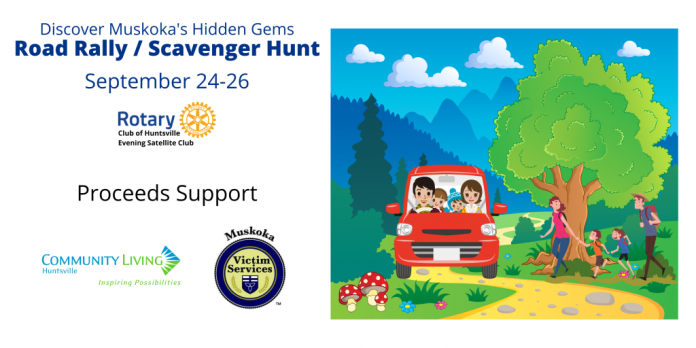 “We wanted to create a fun family event that could be carried out in a pandemic safely and at the same time showcase our amazing topography” said Sharon Wallace, Rotarian and event co-chair.

“We are so excited to have such a successful first year and be able to raise so much money for these charities. These two charities change people’s lives one person at a time,” said Anita Gleeson, Rotarian and event co-chair.

Participants were sent 20 riddles which they had to solve. The riddles took them to hidden gems in our community, beautiful tranquil places off the beaten path. Registrants journeyed around north Muskoka discovering places they may not have been or been to in a while. While they took in the spectacular views they had to take selfies as proof, they found their destinations.

The rally was enjoyed by both visitors and residents with enthusiastic feedback: “Taking part has felt like being tourists in our own town!” “We had a blast this weekend and visited some pleases for the first time though we’ve lived here for ages.”

Prizes were awarded from Algonquin Outfitters, Winners and other community partners.