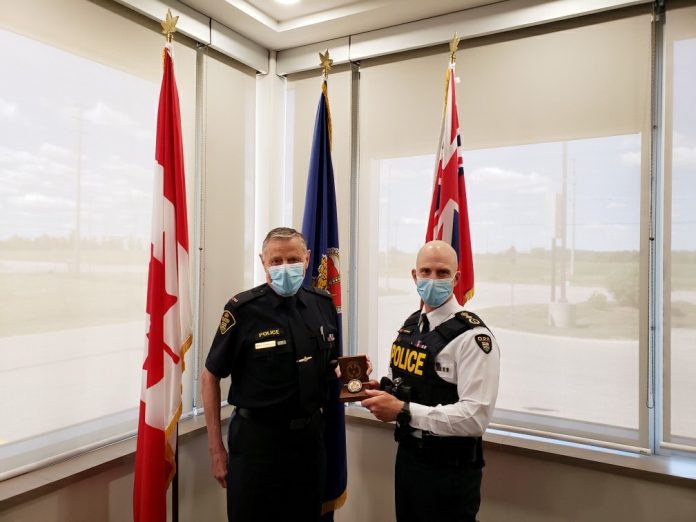 The Nottawasaga OPP are proud to honour and celebrate the retirement of provincial constable Harry Lawrenson.

Harry Lawrenson is a name likely known, not only to police officers but also to many community members of all ages.

He was born on October 12, 1944, and started his impressive career with the OPP on September 17, 1962, as a Civilian Radio Operator at Belleville District Headquarters.

Lawrenson joined the force as an Ontario Provincial Police Constable with class 51 on October 4, 1965. He was posted to Manitouwadge Detachment.

Lawrenson moved throughout the OPP area during his career, spending time at Kakabeka Falls Detachment, and Shelburne Detachment.

Not only did Lawrenson move throughout the OPP, he also changed roles and responsibilities;

November 14, 1977, he transferred to the Intelligence Branch.

September 1, 1980, he received a promotion to Corporal.

January 4, 1982, he transferred to the Training Branch at the newly opened OPP training facilities in Brampton (Queen & McLaughlin Street) as an instructor and a Drill Sergeant.

October 15, 1985, Lawrenson moved to the Office of the Deputy Commissioner (Field Division). A promotion, to Staff Sergeant followed.

On August 1, 1986, he transferred to the Field Coordination Branch.

On April 1, 1987, he transferred to the Computer and Telecommunications Branch.

On December 5, 1988, he transferred to the Security Bureau which led to a transfer to Queen’s Park Detachment in February 1, 1990.

On June 18, 1990, Harry received a promotion to Detective Inspector and was transferred to the Intelligence Bureau, where he remained until his retirement on December 31, 1994.

Detective Inspector Harry Lawrenson had a total of 32 years, 3 months and 14 days of Service to the people of Ontario.

Lawrenson’s career did not end there, in June of 1997, Lawrenson returned to the OPP as a part-time Constable. Since returning, Lawrenson has truly gone above and beyond with his time and commitment to our community.

He has dedicated countless hours to the Drug Abuse Resistance Education (DARE) program, where he has had the opportunity to mentor thousands of youth in elementary schools. Lawrenson has also mentored and trained numerous officers not only from OPP but other forces as well to become DARE qualified instructors.

In 2019, Lawrenson was presented with the DARE International Lifetime Achievement Award.

Lawrenson is now hanging up his uniform and tucking away his boots for the last time. As of June 30, 2021, he has served our community for a combined total of 56 years of service.

“Harry Lawrenson, we are all honoured to have worked with you and wish you all the very best in your well-deserved retirement. You are, and always will be one to look up to. Well done sir, we salute you!”

“Not many of us are privileged to do what we love for a lifetime. Police work has been Harry’s passion and his joy, regardless of his rank or position. His years at Nottawasaga in community policing and in the DARE program have been some of his most rewarding. While we have no doubt that retiring will be bittersweet for Harry, he will always find fulfillment in knowing he spent his life accomplishing his childhood dream of becoming a police officer.”