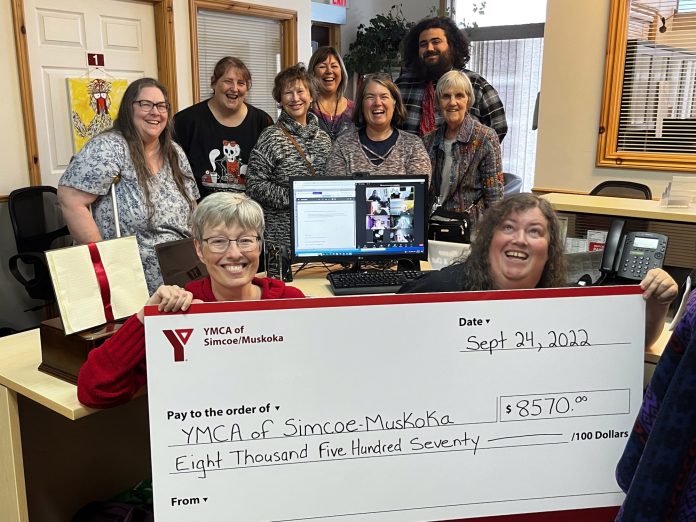 The usually cheery face of Nancy West, Team Leader for YMCA Simcoe-Muskoka’s Literacy program, grows sombre as she speaks at the Muskoka Novel Marathon’s final wrap-up gathering of 2022 at the Y office in Huntsville.

“There are so many foreign workers in this area, we are unable to serve everyone,” she says, adding that they’re from many countries including Pakistan, Chile, Mexico, the Philippines – and, of course, Ukraine. “Almost all of them want to get their permanent residency, want to become part of this great country. But they have to get a certain English level. They want to get drivers’ licenses here, but they have to pass the G1 written test. We are seeing people with zero English.”

There is no government or school-board funded English as a Second Language program in Muskoka – only the YMCA’s free classes, which are funded by the Muskoka Novel Marathon. “Thank you for making this a better place to live for these people who are working, supporting employers who’d have to close if it weren’t for them,” West tells the writers.

Taya McLellan, the Y’s Coordinator of Events and Digital Campaigns, adds: “Increased literacy skills are strongly linked to economic growth, which is why we offer classes like computer skills, academic upgrading, ESL, GED prep, cash handling, and so much more. Funds generated through the Marathon greatly increase our ability to offer these life-changing programs.”

This year’s award winners were lauded at the wrap-up:

Best Novel in the Adult category: Benjamin Glatt (for the second year in a row) (Etobicoke)

Note: Best Novel winners are awarded not only a Muskoka chair, but a chance to have their winning manuscripts shown to a publisher or literary agent. This year it’s At Bay Press in Winnipeg.

Remington Award (for the writer who raises most funds): Donna Curtin, who raised $1,270 from 27 donors