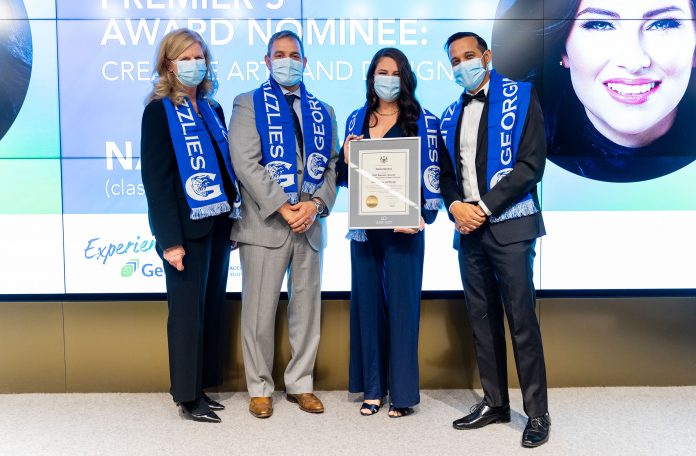 What do an Indigenous actress, industrial electrician, college president, founder of a national charity, health educator, mental health champion and a marine pilot have in common?

They’re all Georgian College graduates, changemakers and nominees for the 2021 Ontario Premier’s Awards. These seven talented Georgian alumni were celebrated at a special virtual ceremony on Nov. 18, and Nadia George was named as the recipient of the 2021 Premier’s Award in the Creative Arts and Design category.

George, a graduate of Georgian’s Social Service Worker program (class of 2009), is an award-winning Mi’kmaw-Canadian Actress, media personality, therapist and public speaker based in Toronto. Her work focuses on uplifting young voices and addressing stigma around contemporary Indigenous identity. Her volunteerism includes roles as a national ambassador, advisor and self-described BIPOC mentor and committee member for several national organizations.

She can be seen in numerous films and television series including History Erased, Along the Water’s Edge and Uncolonize, and her portrayal of Jolene in the award-winning film, Her Water Drum, earned her the distinguished Award of Achievement in Acting for a Leading Role at the Los Angeles Skins Film Festival.

“I’m greatly honoured to be the recipient of this prestigious award,” said George. “Its significance is so much more than recognizing one person’s contribution – it represents the importance of community, connection and collaboration. When we remember this, it guides us to live in a good way; these are teachings we should all live by. Without community, connection and collaboration, my journey would not be what it is today.”

George is one of the college’s 90,000 alumni, making a difference in their communities and around the world.

“We’re extremely proud of Nadia and our six other Premier’s Award nominees, and inspired by their incredible stories and accomplishments,” said Dr. MaryLynn West-Moynes, President and CEO, Georgian College. “They’ve each worked exceptionally hard, and demonstrated that incredible things can happen when you put your skills, natural talent and education to work for the greater good.”

Andrew Cywink (Electrical Apprenticeship – Industrial Electrician, class of 2011): Cywink grew up in Elliot Lake, and is a member of the Whitefish River First Nation. He is a Georgian faculty member with the Electrical Engineering Technology and apprenticeship programs, and a research and innovation technologist in Georgian’s Alectra Centre for Research, Innovation and Commercialization. He’s a certified 442A electrician with Certificate of Apprenticeship and Master Electrician license, and is registered as a Certified Engineering Technologist with OACETT. His volunteerism includes positions as vice president of the Kitchener-Waterloo Urban Native Wigwam Project, and a member of the Economic Development Corporation of North Simcoe board of directors.

Glenn Vollebregt (General Business – Accounting, class of 1983): Vollebregt is a dynamic, high-performing senior executive with a passion for lifelong learning and more than 29 years of experience in large, multi-stakeholder public and private sector environments including postsecondary institutions. He is currently the President and CEO at St. Lawrence College (SLC), where he brings an extensive level of strategic, operational and transformative leadership experience.  Vollebregt led the first tri-campus, and most successful fundraising campaign in SLC’s history, the largest expansion project in the college’s history, and St. Lawrence College has experienced significant growth in student enrolment under his leadership.

Jane Kovarikova (General Arts and Science, class of 2004): After a tough start growing up in foster care and dropping out of high school, Kovarikova found her way to Georgian College and has devoted her professional life to improving outcomes for foster kids ever since. In 2017, Kovarikova founded the Child Welfare Political Action Committee Canada, a national charity that creates systemic changes that empower youth to succeed after care. Currently, Kovarikova serves as board chair of Simcoe-Muskoka Family Connexions, a regional child protection agency, and is on the Ontario Premier’s Council for Equality of Opportunity. She’s a PhD candidate and lecturer at Western University in the Department of Political Science.

Lisa Marie Naponse (Native Education – Community and Social Development, class of 2004): Naponse is an Aanjichigewin Health Educator/Promotor from Atikameksheng Anishinabek First Nation. Her Anishinabe name is Odemin Kwe, meaning “Strawberry Woman,” and in her culture, the strawberry is known as the “heart berry,” nourishing the body, mind and spirit and connecting emotions. Her work incorporates Indigenous language and culture into programming, and focuses on normalizing physical activity and strengthening factors that improve Indigenous People’s resiliency by improving overall quality of life. She’s an active community leader and volunteer, award-winning singer/songwriter, and has captured multiple medals at the North American Indigenous Games.

Jonathan Andrews (Business – Entrepreneurship, 2016): Andrews is a youth mental health champion and award-winning speaker who has combined his lived experiences with clinical depression and anxiety, with skills obtained through his Business – Entrepreneurship credential, creating a business for social good. He’s the founder of Your Mental Health Ally and Project Circle Up, and has delivered over 100 presentations in the last five years to tens of thousands of youth around the world, helping to expand the conversation and reduce stigma associated with mental health. His podcast, Project Circle Up, ranks on Listen Notes as one of the top 10 per cent of shows globally, and his first book Man, You Know I Got You, was released in November 2021.

Seann D. A O’Donoughue (Marine Technology – Navigation, 1997): Captain O’Donoughue is currently a marine pilot with the Great Lakes Pilotage Authority and a marine simulation instructor with Georgian’s Centre for Marine Training and Research, where he uses highly technical equipment to simulate a maritime environment and the dynamic behaviour of a vessel and its systems. Using marine simulation technology, he’s trained cadets on how to safely navigate waters around the world, and to successfully manage some of the harshest environments imaginable. He’s the Past Grand President (North America) of the International Shipmasters’ Association (ISMA), and current President of the ISMA Georgian Bay Huronia Lodge 15.