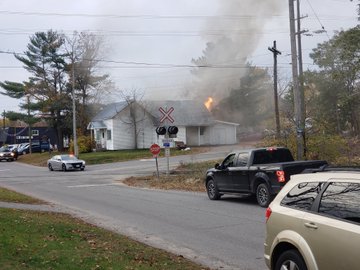 A fire has damaged a home in the urban area of Gravenhurst on Phillip Street at First Street. Just after 4 p.m. yesterday (Tuesday, November 9th),

The fire department said several calls were placed to 9-1-1 by area residents reporting a fire in progress.

Firefighters from all three Gravenhurst stations rushed to the scene to find flames coming out of the second-floor windows of the home with the fire rapidly growing. Fire crews were able to quickly put out the flames and prevent any further spread on the property.

The building contained two apartments units which were both occupied by tenants at the time. Firefighters expressed thanks to the property owner who was the first to call 9-1-1 and assure that all occupants had safely exited the building.

“This fire, again, underscores the critical importance of working smoke alarms,” said Jared Cayley, Gravenhurst Fire Chief. “We want to remind the community that all property owners and tenants must have a working smoke alarm. It’s the law in Ontario,” Cayley added. “Once it starts, a fire in any building can double in size every minute it goes undetected. Early detection is critical to ensuring everyone can evacuate a building safely.”

The investigation into the cause of the fire remains ongoing, however, it is not considered suspicious at this time.

The damage to the property, which is reportedly insured, is estimated at $250,000.00. 24 firefighters attended the fire at its height, the last ones leaving shortly before 8:00 p.m. Residents returned home on Wednesday to gather belongings.

.@GravenhurstFIRE on scene at a home on First St for a house fire
No injuries. pic.twitter.com/ntbYTBFnQE

Vehicle In The Ditch Leads To Impaired Driving Charges In Tay...