Thousands of orange ribbons line the area surrounding Bracebridge Falls, and on Sept. 18, locals will come together to add thousands more in honour of Indigenous lives lost at Canada’s residential schools.

Bracebridge resident NisoMakwa, a two-spirit member of Qalipu Mi’kmaq First Nations whose name means Three Bear in English, has already tied about 2,250 ribbons. Now, he’s working with the Muskoka Indigenous Friendship Community to host a ribbon tying blitz at the falls at 9 a.m. on Sept. 18. He originally planned to tie 4,100 ribbons to represent the student deaths confirmed by the Truth and Reconciliation Commission, but after sharing his plans with the community and connecting with Theresa Buker, founder of the Muskoka Indigenous Friendship Community, he decided to go for 6,509 ribbons to match the current estimate of Indigenous children discovered in unmarked graves at residential schools.

“When I realized how much support was actually behind the idea, and people wanted to get involved and donate and help out, me and Theresa got together and were just like, ‘Let’s go for the full number and do it on the 18th,’” NisoMakwa said.

NisoMakwa’s father and grandfather are residential school survivors, but the full weight of his father’s stories about abuse at the hands of nuns didn’t set in until their band was recognized by the government in 2008. Prior to that time, he was raised Catholic and didn’t know he was native.

The residential school system did what it was designed to do by hiding his heritage, he said. Since that time, he’s worked to learn about his background and get in touch with Indigenous traditions and culture. Tying ribbons has given him time to think about his upbringing as well as the many Indigenous children who died in residential schools.

Finding The Full Truth Of The Tragedy

The total number of children who died in the residential school system remains unknown. The Truth and Reconciliation Commission (TRC), which was created to document the history and impact of residential schools, requested funding in 2009 to identify burial sites and further study the deaths that occurred at the institutions.

Early estimates placed the budget for the project “in excess of $1.5 million.” The federal government led by Stephen Harper denied the request in December 2009, which “placed significant limits on the Commission’s ability to fully implement the working group’s proposals,” according to the TRC.

“The tragedy of the loss of children was compounded by the fact that burial places were distant or even unknown,” said a TRC report in 2015. “Many Aboriginal people have unanswered questions about what happened to their children or relatives while they were attending residential school. The work that the Commission has begun in identifying and commemorating those students who died at school and their gravesites needs to be finished.”

After the discovery of over 1,300 unmarked graves across the country this year, ​​Crown-Indigenous Relations Minister Carolyn Bennett announced $83 million in funding on Aug. 10 to help locate burial sites and memorialize the children who died. The funding will supplement $27.1 million already committed to the cause in the government’s 2019 budget.

Hearing about the remains of 215 children discovered in May this year at the former Kamloops Indian Residential School in British Columbia hit close to home for NisoMakwa, and it’s been painful hearing about the discovery of more and more unmarked graves since. Despite the continual flow of difficult news, becoming familiar with the Indigenous community established in Muskoka has been a special experience for him.

Since he moved to Bracebridge last year, it’s been an honour to meet other Indigenous people like Buker and see the work they’ve accomplished, NisoMakwa said, but he’s also noticed an overall lack of representation in the community. One of the few acknowledgements of Indigenous culture in town is a totem pole near the falls.

“There is a set of wings that are broken off, that are missing,” he said. “There’s a beak that’s broken off and missing. It desperately needs to be touched up and repainted. There’s no plaque describing who built it, where it came from, what band it represents, the story behind it, the clan. There’s none of that.”

To help improve representation, NisoMakwa now sits on the Inclusion, Diversity, Equity and Anti-Racism (IDEA) Advisory Group for Muskoka District Council. He’s currently working to find a space in Bracebridge for the Indigenous community to gather since the closest Friendship Centres are in Parry Sound, Midland and Barrie. He’s happy to have the chance to voice the opinions and concerns of local Indigenous people, especially because it’s something he didn’t experience elsewhere in Ontario.

Living in Toronto, London and Washago, people weren’t as open to asking questions and getting educated, he said, which often translated to judgment. He appreciates the willingness of locals to learn more, though he has witnessed negativity and prejudice at times, including vandalism to local memorials. It can be hard to face, but NisoMakwa sees negativity as an opportunity.

NisoMakwa is hoping for a good turnout at the ribbon tying blitz on the 18th and he’s looking forward to meeting more of the community. His goal is to help educate people and to bring awareness to the cause, so he encourages anyone who’s curious to get involved, approach him and ask questions, whether it’s at the event or elsewhere in the community.

“Come learn, experience it for yourself, watch, ask questions, participate,” he said. “That’s the only way you’re going to experience and understand the culture and the traditions and the teachings for yourself.”

If you have been affected by residential schools and need support, contact the 24-Hour Residential School Crisis Line at 1-866-925-4419. 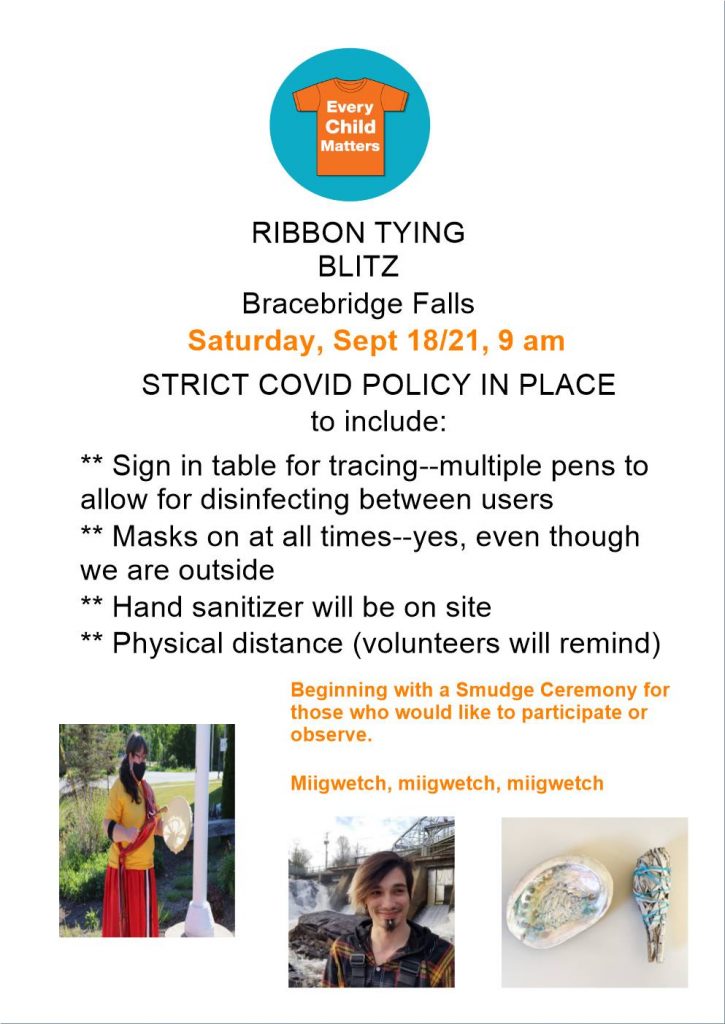