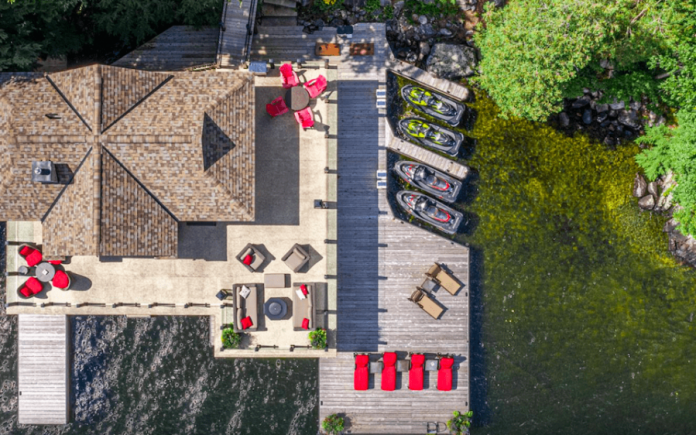 If you took a recent Architectural Digest headline literally, you’d think that Muskoka is a hidden gem on Canada’s luxury real estate scene — a secret place yet to be discovered.

The publication posted a headline that many familiar with the Canadian luxury real estate world would find amusing. It reads, “This is Why Muskoka is Canada’s Best Kept Secret in Luxury Real Estate.”

Our question is, best kept secret to who in luxury real estate?

Surely, not the wealthy residents of Ontario — or Canada (and beyond), for that matter.

READ: John Cleese Searching for Place to Stay in Huntsville After Airbnb Misfortune

“I was a little surprised by the headline, but if you’re talking about a broader audience, many may not know,” says Maryrose Coleman, a realtor at Sotheby’s International that specializes in the Muskoka region. “I think that, because it’s an American audience, maybe that’s why it was called a best kept secret. But the New York Times has done features, the Wall Street Journal has done features, the secret is definitely out.”

True — the publication is American. But, considering household names like Goldie Hawn and Kurt Russell, Cindy Crawford and Rande Gerber, Martin Short, Tom Hanks, and Steven Spielberg (to name a few) are all known to frequent Muskoka, you’d think that North America’s one-percenters would be well aware of the pristine region — (admittedly, maybe not all of the publication’s readers, but certainly those familiar with luxury real estate, making the headline a little misleading).

Word’s even gotten out across the pond: Earl Charles Spencer — Princess Diana’s brother — is a recent owner of a few multi-million-dollar Muskoka properties.

To be fair, the publication does indeed highlight the famous faces known to grace Muskoka’s big three lakes — Rosseau, Joseph, and Muskoka — and it does aptly make the accurate comparison between New York’s Hamptons and Los Angeles’s Malibu on the elite-weekend-escape-of-choice front.

While Architectural Digest also correctly points to the contradiction in calling Muskoka’s massive and modern waterfront properties “cottages,” (“lake house” is more accurate), the piece sort of misses the mark on the region’s vibe. “An understated vibe where people aren’t interested in flashiness is also key to why Muskoka is so attractive,” reads the article.

While it may not be the same level of flashiness as Malibu, Muskoka can certainly be flashy, as many of its weekend residents play a not-so-discreet and perpetual game of keeping up with the Jones’.

“I’m sitting in Port Carling looking out the window at the main street watching Ferraris, Maseratis, Lamborghinis, Porsches, and Range Rovers drive by,” says Coleman. “It’s common to go into the Port Carling LCBO and see someone drop $16K for wine for the weekend. It’s pretty damn flashy, depending on your definition of the word.”

She does, however, acknowledge Muskoka’s distinctly more casual style than that found in Toronto (although this may involve a $500 sweatsuit and fresh new kicks). Coleman addresses the region’s low-key vibe that may attract celebs as something more accurately described as a Canadian phenomenon. “Like in Toronto, they like that nobody really bothers them,” she says of Muskoka’s famous faces.

And while there was a time (long, long ago) when acres of land and countless pine trees separated one “cottage” from the next, this hasn’t been a reality for decades in most of the region, as its most coveted lakes have only increased in density with each modern and sprawling new vacation home.

“I find the comment about the appeal of privacy a little debatable because there’s so little privacy here now,” says Coleman. “Unless you’re in the $10-$15-million-dollar range and have an extra $3-million for a privacy buffer zone around your property, there’s very little privacy; your neighbour is going to be pretty close.”

In recent years, Coleman has helped deep-pocketed Americans secure a multi-million dollar slice of Muskoka, many of them familiar with the region through friends and colleagues.

“In addition to a great vacation spot, people look at Canada as a safe haven investment-wise; so they’ll often do what they call land banking; investing in a real estate market that has the assurance of value and safety — Muskoka is one of those places,” says Coleman of the purchasing habits of many American one-percenters.

So, while there was indeed a time when Muskoka remained a relatively unknown spot on the global luxury real estate scene, that was long before Wifi, wakeboard boats, and chef’s kitchens became staples in the coveted region.

And it’s likely only going to become more well-known among the elite on the global stage. “Any couple that Charles Spencer and his wife Karen knows, for example, now know about Muskoka,” says Coleman.