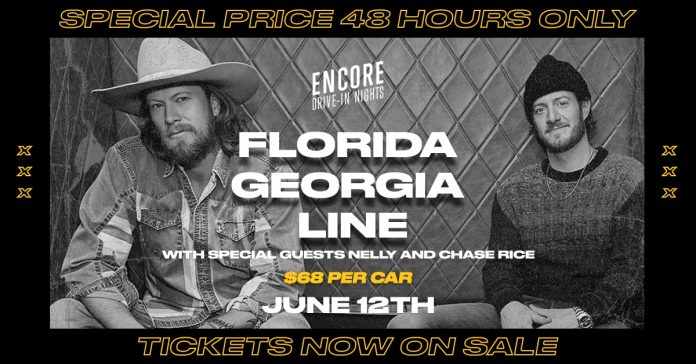 Florida Georgia Line will headline the next Encore Drive-In Nights concert, which will be broadcast to hundreds of outdoor drive-ins and select cinemas across North America and around the world Saturday night, June 12. FGL’s performance will feature special guests Nelly, Chase Rice and Rachel Wammack.

The one-night-only show will highlight the Diamond-selling duo’s biggest hits as well as new fan favorites from their current LIFE ROLLS ON (BMLG Records) album, including consecutive chart-topping singles “Long Live” – dubbed “The Song That Will Have You Grabbing a Cup To Toast” by Billboard – and the “country-rock jam tailor made for summertime” (The Tennessean) “I Love My Country.”

“We’re so excited to start playing shows again and can’t wait to bring this special one to all of our fans around the world,” shares FGL’s Tyler Hubbard and Brian Kelley. “The night will be full of hits, good vibes, and a few surprises. Everybody come on out June 12!”

“We are so excited that Encore Drive-In Nights concerts are back and who better to welcome summer than these party-starters themselves?” said Walter Kinzie, CEO of Encore Drive-In Nights. “This show provides fans all across the country, including those that don’t typically go to concerts, the chance to see FGL like never before!”

The announcement by FGL follows the recent news that Bon Jovi will kick off the new 2021 Encore Drive-In Nights Concert season on May 22. Encore Drive-In Nights pioneered in-person entertainment in the COVID-era last year with performances by Garth Brooks, Blake Shelton & Gwen Stefani, Metallica, Kane Brown and other amazing musical guests for one-night-only concerts broadcast to fans at outdoor venues across the country.

FGL has been making history since 2012, as the first and only Country act to achieve two RIAA DIAMOND-certified singles with 11X PLATINUM, #1 breakout “Cruise” and 10X PLATINUM, #1 “Meant to Be” with Bebe Rexha. The global superstars have tallied 13.2 billion+ streams, sold more than 40 million tracks and 4.7 million albums worldwide, stacked 18 career #1 singles and played to over 4 million fans spanning massive arena and stadium headline tours.

The Encore Drive-In Nights series is presented by leading event production company Encore Live, which has partnered with drive-in theaters across the globe to provide music fans world-class entertainment in a safe way in the Covid era and beyond.

Car passes for the Florida Georgia Line Encore Drive-In Nights show, which can be used by up to six people per vehicle, go on sale today at encorenights.com/fgl with drive-in tickets being sold exclusively through TIXR. A limited quantity of general admission tickets will be available for just $68 per car for 48 hours before prices increase to $79 then $89 per car + fees. For more information and to see if a venue near you is participating, visit encorenights.com or call your local theater. For a full list of procedures that the Encore Drive-In Nights is employing to keep fans and staff safe, visit encorenights.com.

Tickets for drive-in locations are being sold exclusively through Tixr, a specialist in large-scale experiential commerce solutions whose flexible proprietary technology platform is perfect for scalable artist-centric events. Tixr and Encore have worked to expand the offerings in 2021 to include merchandise, food and beverage options, and have introduced payment plans and flex-pricing to make tickets more accessible to fans.

This season, artists can broadcast their performance to a new global network of indoor theaters as well, thanks to an exclusive distribution agreement between Encore Drive-In Nights and Trafalgar Releasing, allowing fans that do not have an outdoor venue nearby to have an amazing concert experience at their local cinema. Indoor cinema locations and tickets can also be found at encorenights.com/fgl.