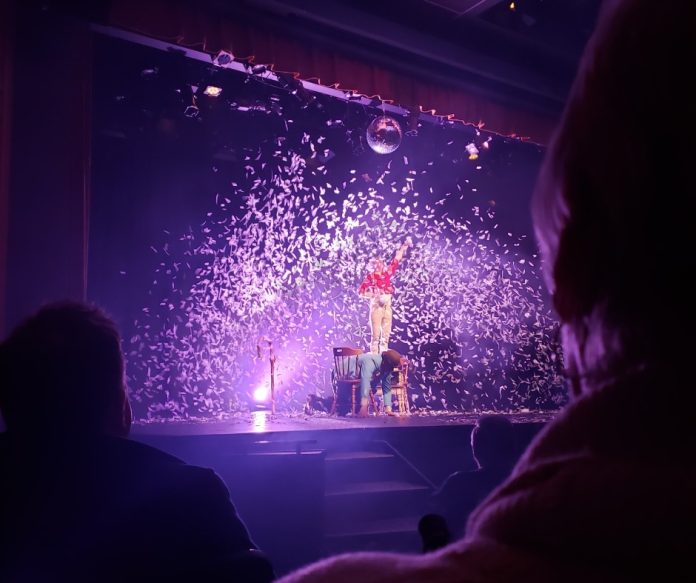 Buckle your seats and grab your teacups, British comedians James and Jamesy bring their unique brand of hilarity across Ontario this holiday season – including stops in Parry Sound, Huntsville, Orillia, and more…

Reminiscent of classic British pantos, O Christmas Tea is rich with wordplay, comic physicality, and cleverly crafted interactive elements, yet it is the duo’s boundless imagination and endearing chemistry that provide the real magic of this play.

“The Christmas season is the time of year when we are encouraged to dream big, embrace imagination, and celebrate child-like excitement for magic and merriment,” says Alastair Knowles, who plays Jamesy, the quirky half of London’s 3-time Impresario Award-winning duo. “With O Christmas Tea, we bring together multiple generations in the theatre, laughing and enjoying each other’s company – and ours.”

James and Jamesy have already won just about every comedy award they can, and the reason is obvious: these two are exceptional. Stepping away from their Off-Broadway run, the duo are set to delight thousands of Ontarians this holiday season.

Christopher Hoile, a reviewer for Stage Door Toronto, met the duo on their first Canadian tour back in 2013 and was awed by their ability to elicit a sense of play in a room full of adults, saying “As adults we praise the imagination that children have in playing and creating as if we no longer have it. Just an evening with James & Jamesy proves we have not lost that imagination. We simply haven’t been given the space, encouragement, or freedom to exercise it. That’s exactly what James & Jamesy give us. The immense pleasure we feel comes from realizing that a power we thought was lost has only been dormant.”

Juxtaposing British propriety with an unabashed love for the unexpected, O Christmas Tea casts away the conventions of theatre and joyously breaks the fourth wall. In fact, just about the only thing these two don’t break is their Royal Doulton tea set in this wonderful evening of play and whimsy.

Leap to get tickets!

O Christmas Tea: A British Comedy is touring 31 cities throughout the province including:

Go to www.OChristmasTea.com for dates, locations and tickets.

*This article is sponsored By O Christmas Tea