The Muskoka committee of volunteers for Crime Stoppers is hosting an all-you-can-eat pasta dinner to raise money for the Simcoe-Dufferin-Muskoka chapter of the organization.

Crime Stoppers is a non-profit, volunteer-based organization that allows members of the public to report information about crimes anonymously with the possibility of receiving reward money. In 2019, tips made through the local Crime Stoppers program led to 80 arrests, 327 charges and over $10,000 in rewards. Since the program’s inception in 1987, Crime Stoppers Simcoe-Dufferin-Muskoka (SDM) has received over 64,000 tips, which have led to 4,897 arrests and 10,288 charges. The fundraiser in support of the local Crime Stoppers program will be held at the Pasta Tree & Smokehouse in Bracebridge from 4 to 8 p.m. on Feb. 23, featuring door prizes, a silent auction, and Mickey and Minnie as entertainment for the kids.

Leslie Woodley, OPP coordinator for Crime Stoppers SDM, said the fundraisers like the pasta dinner are absolutely essential to the survival of regional programs.

“Without the fundraising and donations and all the volunteer support, we would not exist,” Woodley said. “It’s not a government-funded program or anything like that, so the tip money that we pay out is all from donations and fundraising.”

Fundraisers also help cover the operational costs of the program, Woodley said. Last month, Crime Stoppers received $450,000 from the Ontario government to help keep the tip line going, but the money went to the call centre rather than the 39 individual programs throughout the province.

Woodley attends as many community fundraisers as she can to connect with the community and get the word out about Crime Stoppers because, along with fundraising, raising awareness is an important part of their efforts. Since the Muskoka volunteer committee formed a year and a half ago, they’ve worked to build up awareness of the program by attending events like fairs, farmer’s markets, parades and more.

“Our tip volume has increased significantly in Muskoka since we’ve had our committee running just because of all the awareness,” Woodley said. “The more tips we get that can help solve crime in the area help make all the communities in Muskoka and area safer.”

Madeline Stieler, chair of the Muskoka committee of volunteers, said the group has had a great time connecting with the community and spreading the word at events. Many people have thanked them for being part of the committee, she said, and the community has started to really embrace them and their work.

“When we first started this committee, nobody really knew who we were or what we did,” she said, adding that many people thought they were the OPP. “It’s just been amazing to have them actually think, ‘We now know who you are and what you do, and we want to help.’”

The pasta dinner is the committee’s first fundraiser and support from the community has already been amazing, Stieler said. Local businesses have donated products and services for the event’s silent auction and door prizes, including DJ services, spa packages, cleaning services and more. Stieler said they never expected to get so many donations and the items are still coming in from local supporters.

“We’re progressively getting more,” Stieler said. “As our volunteers are going out into the community and talking to people, everybody just seems to want to help, so it’s really great that the community is all coming together to help with this.”

To see the menu, visit the Facebook page for the event. To purchase tickets for the fundraiser, contact Madeline Stieler at 705-801-5735 or at mbilz@hotmail.ca. 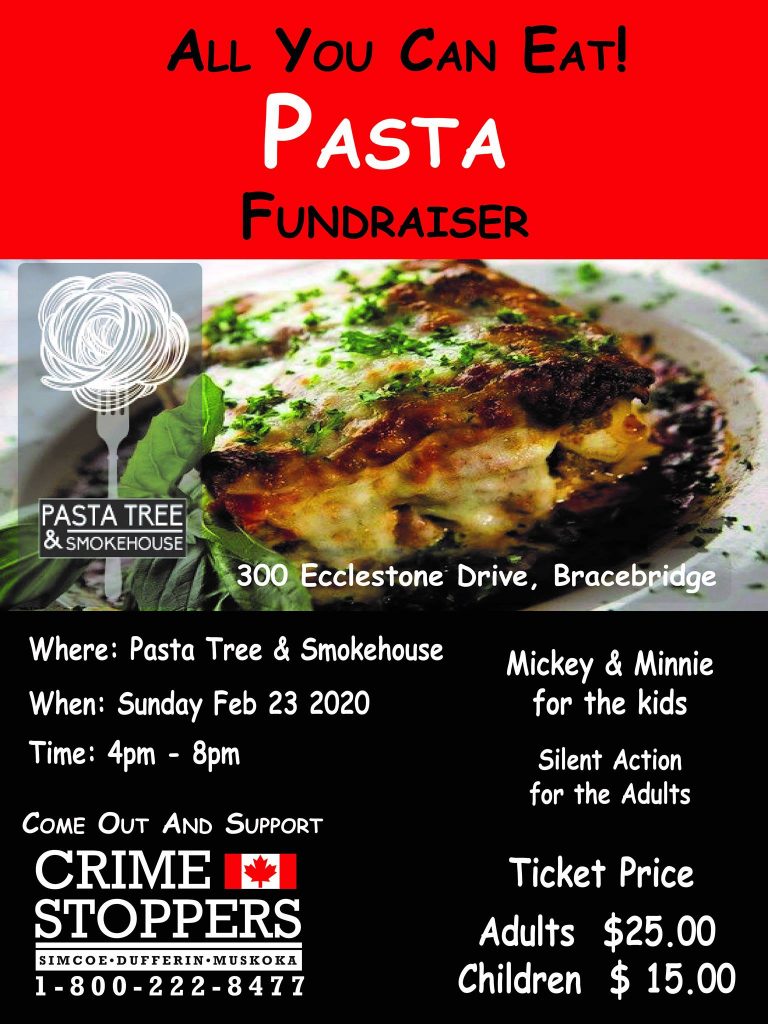