University of Ottawa rowers Vienna Scholten and Rhiannon Crichton received The Above and Beyond Athlete of the Year award at the Canadian University Rowing Championships held in St. Catharines on November 5th and 6th.

The award recognizes their work in supporting and developing the sport of rowing, particularly at the Muskoka Rowing Club (MRC) located in Kelvin Grove Park by Bracebridge Falls.

“Vienna and Rhiannon not only trained all summer with the Muskoka Rowing Club, (but they also) took on administrative and coaching roles. After being closed for two years, MRC lost almost half its regular membership, so it was important for the club to have a successful Learn to Row program. Vienna and Rhiannon were integral to the success of this program,” said MCR head coach Cindy Rusak in an email to Muskoka 411.

The two student-athletes are lifelong friends who have been inseparable since meeting in kindergarten. They grew up together in Bracebridge and were in the French immersion program at Monck Public School. They are both in their final year of the bachelor of commerce program at the University of Ottawa, where they’ve been rowing teammates for all four years.

Crichton says the award is made extra special by receiving it with her friend for the work they did for their hometown club.

“I actually have Vienna and her mother, Anita, to thank for introducing me to rowing in 2019. It was so special to be able to return home to Bracebridge this past summer and give back to the club where it all started for me. Being recognized at the Canadian university rowing level for our work is not something I expected would happen, but there is no one else I would want to do it with.”

Scholten and Crichton were nominated for The Above and Beyond Athlete of the Year award by University of Ottawa head coach Zachary Lewis which they received at the awards banquet after the National Championships.

“We didn’t know that we had been nominated until they were reading out the list of nominations, and I think we were extremely shocked. Several people said they wished they had a camera out when they saw our faces because our jaws hit the floor. We were absolutely shocked and incredibly humbled that someone would think to recognize us and the work that we put in,” said Scholten in an interview with Muskoka411.

The 21-year-old was introduced to rowing by her mother at MRC a decade ago. Scholten says the award is also a tribute to the club and the opportunity it has afforded her and others.

“It’s really come full cycle. I started out being (at MRC) watching my mom row, then I was coxing, then I was rowing, and now I’m able to coach and be on the board to try and give back to the community. 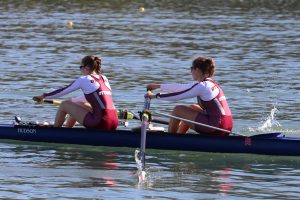