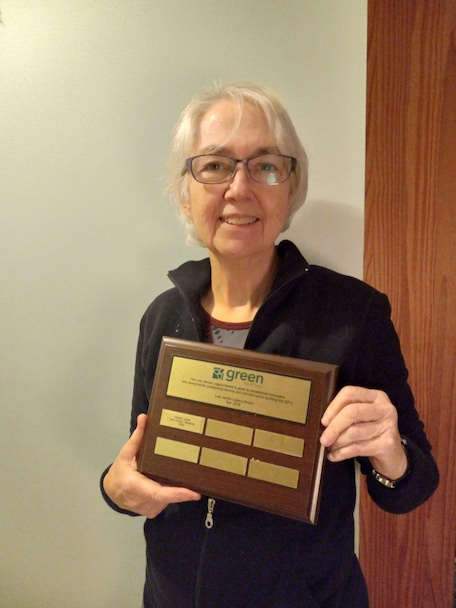 Gravenhurst resident Arleigh Luckett has been awarded the Lois James Volunteer Award for 2022, the Green Party of Ontario (GPO) announced Tuesday in a press release.

Every year the GPO recognizes an outstanding volunteer whose dedication and service have significantly advanced the values and policies of Green Party constituents, supporters, and voters.

Luckett was elected President of the GPO Parry Sound-Muskoka Constituency Association in 2018 and has worked on behalf of Green Party candidates and initiatives for 14 years, including as campaign manager for two campaigns.

“Luckett is a most deserving recipient and has been instrumental in building campaign successes in Parry Sound Muskoka,” said volunteer coordinator Linda Mathers in the press release.

Most recently, Luckett served on Ontario candidate Matt Richter’s campaign focusing on the Gravenhurst area and data management. Richter almost became the second green MPP but narrowly lost to Progressive Conservative Graydon Smith by 4.7 per cent of the total vote.

“The key to success and volunteer retention is true teamwork,” Luckett said. “I’ve had the pleasure of working with more than one highly motivated team within the Green movement.”

Luckett, who moved to Muskoka in 1970 after graduating from The Ohio State University, has a long history of volunteerism with various Ryde community organizations, Girl Guides Canada, Syrian Refugees Gravenhurst, and the Gravenhurst Against Poverty community gardens project. In 2016, she received the YWCA Women of Distinction Award for Lifetime Achievement.

She is currently working with other volunteers to organize opposition to Doug Ford’s push to build Hwy 413, open up the Greenbelt, and pass ‘The Build More Homes Faster Act.’

All three threaten not only the green spaces critical to our food supply and climate resiliency but drastically alter land use planning giving power to the Provincial Government to overturn local municipal planning policy and decision-making,” says Luckett. “The work of holding MPP Graydon Smith and Doug Ford to account can’t wait four more years.”