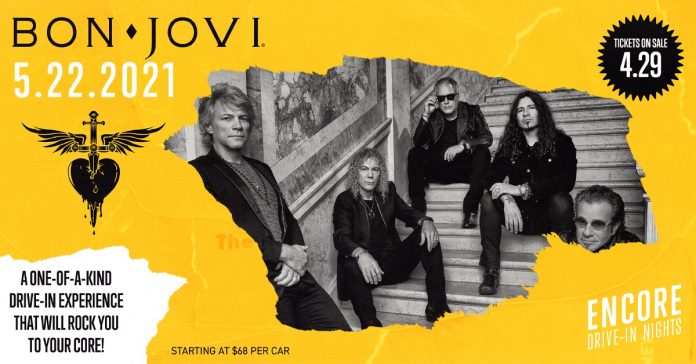 Rock & Roll Hall of Fame band Bon Jovi will kick off the Encore Drive-In Nights 2021 concert series with an exclusive brand-new show premiering on May 22, 2021. The never-before-seen concert will be broadcast at venues around the world, including approximately 300 drive-in and outdoor theaters across the United States, Canada and Ireland, and select indoor cinemas around the globe. Bon Jovi’s show follows the massive success of the Encore Drive-In Nights 2020 series, which hosted global superstars Metallica, Blake Shelton, Gwen Stefani and Kane Brown and safely entertained nearly a million fans across North America.

Encore Drive-In Nights pioneered in-person entertainment in the COVID-era last year by hosting superstar acts for one-night-only shows broadcast for fans at outdoor venues across the country. As the world begins to reopen from the pandemic, Encore Drive-In Nights is continuing to reinvent live entertainment in a post-COVID world as well. These shows will enable fans who live outside of traditional touring stops to enjoy concerts by their favorite acts in ways that were never before possible.

“Bon Jovi is a global icon and we’re so happy that the band will be launching our 2021 concert season!” said Walter Kinzie, CEO at Encore Drive-In Nights. “The pandemic has taught us that there are new avenues for live entertainment and this model is one of the safest and most innovative options for world-class, fun events for the whole family. There are millions of fans who don’t usually attend live shows, whether it’s because they live far away from the big touring arenas or because of the cost. Artists can now connect with these fans in a completely new way.”

Over an illustrious career spanning more than three decades since their formation in 1983, Bon Jovi has earned their place among global rock royalty and was inducted into the Rock & Roll Hall of Fame as well as the Songwriters Hall of Fame. With over 130 million albums sold worldwide, an extensive catalog of hit anthems, thousands of concerts performed in more than 50 countries for more than 35 million fans and ticket grosses well over $1 billion around the world in the last decade alone, Bon Jovi is the consummate rock & roll band.

The Encore Drive-In Nights series is presented by leading event production company Encore Live, which has partnered with drive-in and outdoor theaters across the globe to provide fans world-class, live entertainment in a safe, creative way. Artists can broadcast their performance to a new global network of indoor theaters as well, thanks to an exclusive distribution agreement between Encore Drive-In Nights and Trafalgar Releasing, allowing fans that do not have an outdoor venue nearby to have an amazing concert experience at their local cinema. International screening dates outside of the US and Canada will be announced soon.

Tickets for the Bon Jovi show go on sale April 29th at 12PM ET at bonjoviconcert.com. For more information and to see if a venue near you is presenting the show, visit encorenights.com or call your local theater. For a full list of procedures that the Encore Drive-In Nights is employing to keep fans and staff safe, visit encorenights.com.