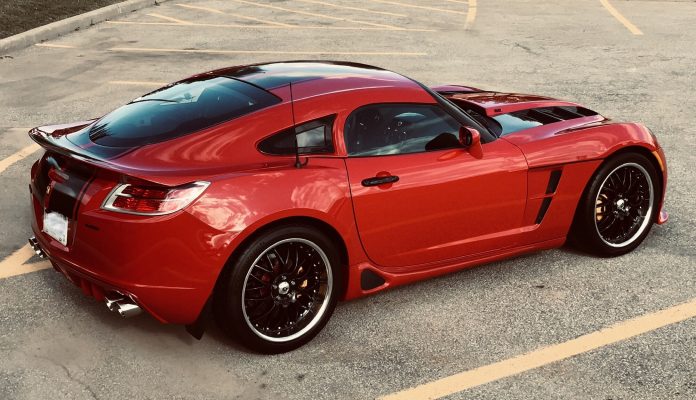 The temporary transition from Gull Lake Park to the world wide web, has proven a successful one for organizers of the Gravenhurst Car Show.

The first-ever virtual Gravenhurst Car Show, sponsored by Gravenhurst Canadian Tire, wrapped up last week after giving guests seven days to go online, view the classic automobiles and cast their votes for the best of the best. In the end, the virtual show drew more than 5,100 visitors from around the world, including England, Germany, the USA and Australia.

“We were pretty amazed with the response,” says Chris Hammar, Marketing and Sponsorship Lead with the Gravenhurst Chamber of Commerce, who organizes the event. “Word really spread, especially among various car groups and enthusiasts, and in the end we had more than 200 people submit pictures of their vehicles and more than 2,000 votes cast.”

The winner of the 2020 People’s Choice Award was William Toy of Binbrook, Ontario who showed off his custom 2007 Saturn Sky Redline. The other top ten vote-getters were Len Howe with his 1965 Ford Mustang GT Coupe, Grant Wood with a 1963 Ford Falcon, Dan Lajeunesse with a 1953 Oldsmobile 98, Christie Lawson with a 1996 Pontiac Firebird Trans Am, Brian Bush with a 1997 Ford Mustang, Cory Clarke with a 1956 Pontiac Laurentien, Lawrence Shackleton with a 1932 Ford Roadster, Doug Daniels with a 1965 Ford Mustang and Ken Bowler with a 1935 Ford Cabriolet. You can view all the winners at www.gravenhurstchamber.com/gravenhurst-car-show/show-entries.

Every year donations collected at the Car Show help fund a bursary for a Gravenhurst High School Student going into the automotive field, and this year is no exception. Enough money was donated by virtual car show entrants that organizers can once again offer the bursary.

“You never know how people will take it when you have to change something they love but we’ve had nothing but positive feedback,” says Sandy Lockhart, Executive Director of the Gravenhurst Chamber of Commerce. “We had people going out their way to get donations to us electronically and by phone, people buying Car Show t-shirts online – we were thrilled. It’s also made us more determined than ever to put on a great show in person next year and welcome back everyone we didn’t get to see this year.”

Expect the Gravenhurst Car Show to be back at beautiful Gull Lake Park in 2021 on Saturday, June 19.