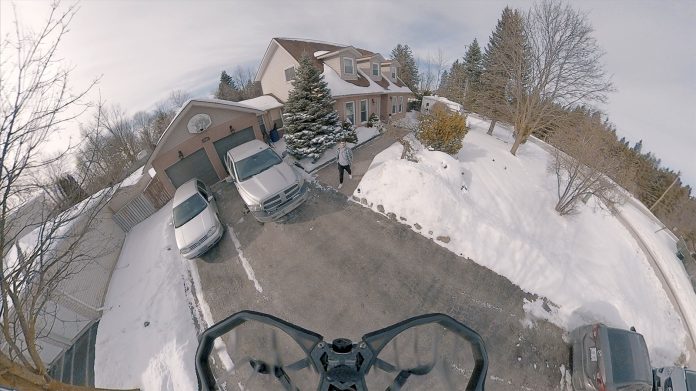 Is it a plane? Is it a bird? No, it’s #AirGrizzly, the drone dropping off an acceptance offer to the doorstep of three very surprised Georgian College applicants this week.

“The past year has been strange and challenging for all of us, so we wanted to do something fun and unique for some of our newest Georgian Grizzlies by delivering their acceptance offers by drone,” said Cindy Mutchler, Georgian’s Registrar. “We chose three applicants to our new Mechatronics program and delivered the special packages to their doorsteps – to brighten their day, and help create the first of many unforgettable experiences at Georgian.”

Marco was happy to receive his Georgian acceptance offer – and especially via drone. “I love technology and futuristic kind of stuff, and I’m super pumped about using robots at Georgian,” he said. “I know Georgian also has a good reputation and it’s local.”

He added that he’s always liked to build things. “I maybe want to be an engineer of some sort. I had a virtual meeting with a student recruiter from Georgian and he introduced me to the Mechatronics program. I’ve always been interested in robotics – it’s a hidden passion. He told me about the program, which is very new and includes a co-op with it, which I like as well. I was hooked, so I applied – and looks like I got in!”

#AirGrizzly’s delivery was especially exciting in the Little household as it coincided with birthday celebrations for Ryan’s dad Chris. “I think it’s kind of special that I got to have a bit of a celebration this morning and now it’s time for my son,” said Chris.

Ryan said he’s heard good things about Georgian from anyone who’s gone there, including his brother who is a student in the Honours Bachelor of Business Administration (Management and Leadership) program. “They loved it – the teachers, the equipment and the programs. And honestly, it’s just one of the schools I’ve had my eye on for a while. It’s the only one I applied to,” said Ryan.

Ever since he was a kid, Ryan has loved knowing how things work. “I’d always take apart anything in the house and built it,” he said. And his dad has witnessed this in action. “First it started with the cupboards,” said Chris. “I’d come home and all the doors were off, all the handles were off, all the hinges were off. He’d say, ‘I’ll fix it. I just need to know how it works.’ And that’s when he was five. Ever since then, anything that’s broken he wants it first.”

Ryan’s mom Jacquie thought the drone delivery was really cool. “I was inside looking out the window going, ‘There’s a drone coming up our driveway!’ That doesn’t happen every day. I’m also very excited for Ryan. He’s our youngest, last one to launch, and it’s good to see him excited about it,” she said.

Daniel said he never expected to receive his offer via drone and thought it was an interesting way to send it. “I’m mainly looking at how machines work – that’s where I want to go with my career,” said Daniel who chose Georgian because it’s close to home. “I like science, I like figuring out how things work. I take things apart every now and then to look at what’s inside and how it works. I just took apart my PS4 controller and looked at how circuit boards work. You can see why it’s designed this way, and what it gives because of it. It’s cool to me.”

#AirGrizzly’s travel adventures to all three applicants were captured on video. You can watch how the day unfolded here.

As exciting as the drone delivery was for Daniel, Ryan and Marco, all other acceptance offers from Georgian were sent out starting Feb. 1 the traditional way: via email and mail. Georgian will continue to accept applications and issue offers for upcoming semesters in spring, fall and even winter 2022. 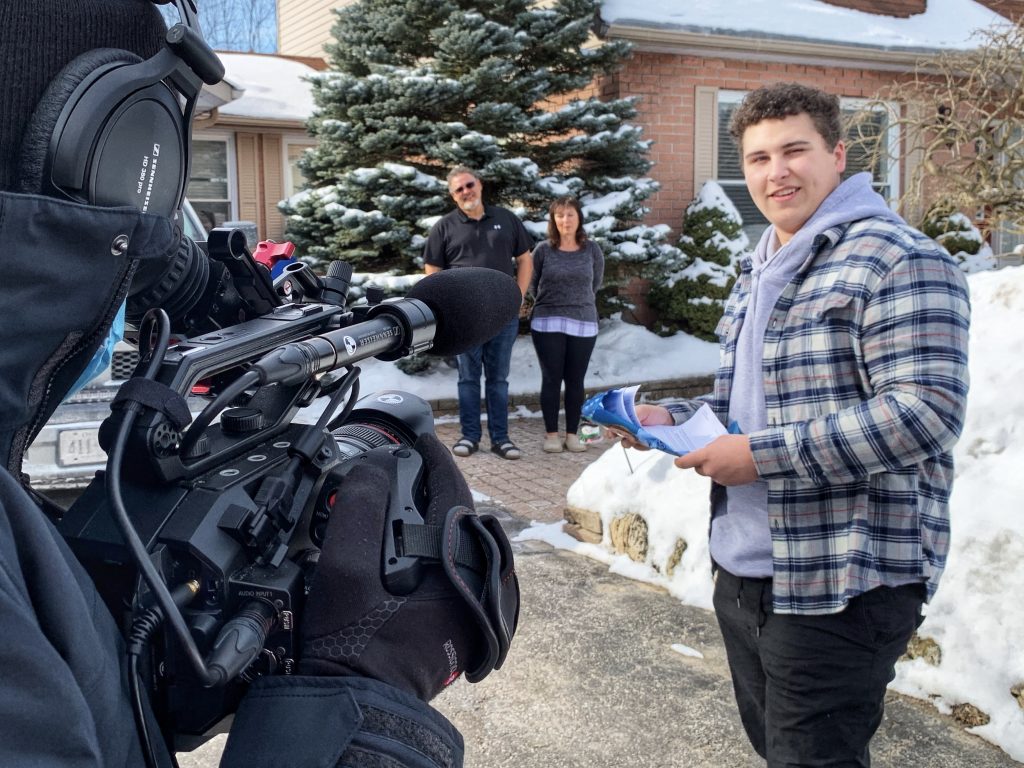 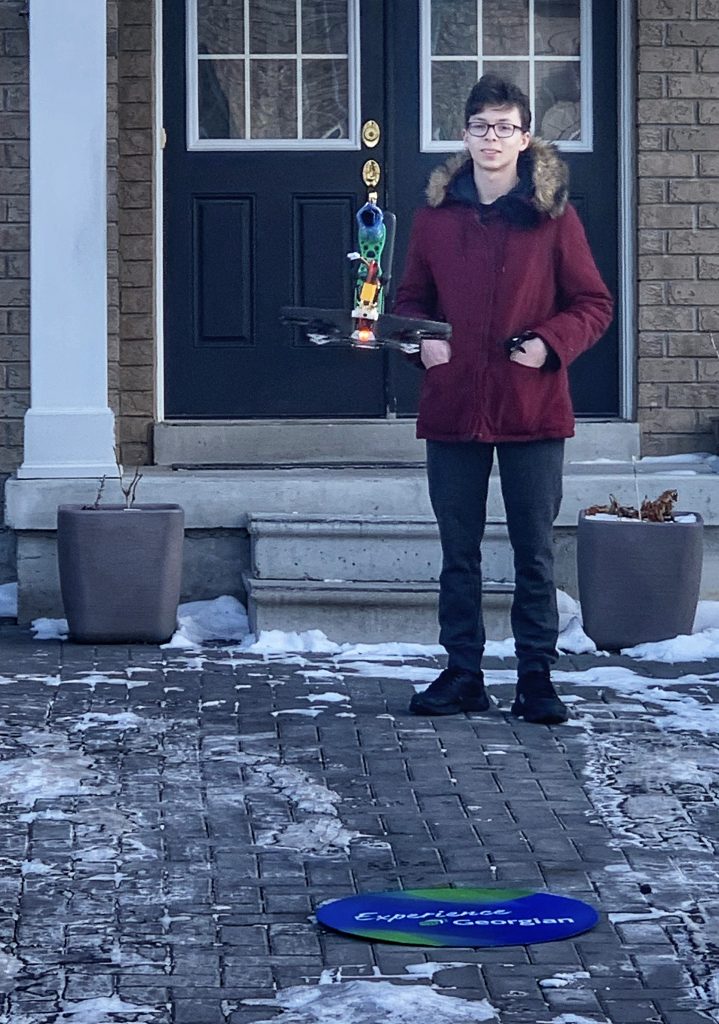 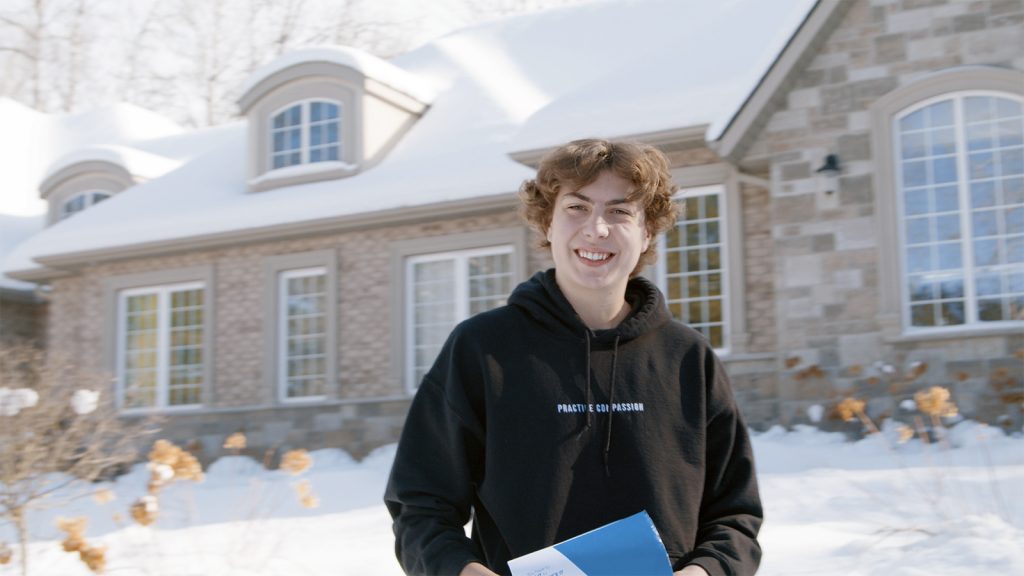