Trevor Guthrie, Jully Black, Kardinal Offishall, Karl Wolf and Suzie McNeil will be performing a concert on the water as part of the Boat Rally for Kids on August 21

Canadian singer-songwriter Trevor Guthrie will be joining four other Canadian artists for a concert on the water this Saturday as part of the Boat Rally for Kids, a fundraising event in support of Holland Bloorview Kids Rehabilitation Hospital.

The event first launched in 2013 as the Boat Rally for Kids with Cancer, aiming to raise money and awareness for pediatric oncology. Along with the Car Rally for Kids in Toronto, the boat rallies in Muskoka have helped raise over $25 million for SickKids, the Pinball Clemons Foundation and other causes that support children. Last year’s boat rally was cancelled and replaced with an online auction due to COVID, so Joel Hock, co-founder and organizer of the event, and the rest of his team are excited to bring back some of the camaraderie and socialization of past events.

“That’s one of the main reasons why we’ve been so successful over the years is we want the integration and we want people to understand that we just don’t put a logo up on a PowerPoint on a screen,” Hock said. “We want you to talk to these kids and their parents and we want you to truly understand what they’re going through and how they’re fighting and how wildly enthusiastic and exciting these kids can be even knowing what they’re going through.”

Holland Bloorview is Canada’s largest children’s rehabilitation hospital and offers a range of services and resources for kids with disabilities. Last year’s online auction raised over $60,000 in support of building an accessible playground at the hospital, and Hock is hopeful for another great year of fundraising on the waters of Lake Joseph and Lake Rosseau.

“Rising tides lift all boats, so the opportunity that if everybody comes together, then guess what? The kids are going to benefit from all of the new programming and resources that will be raised,” Hock said.

This year’s event will still look a little different as participants stay on their own boats with their fundraising groups to ensure everyone’s safety. A concert will follow the Christmas in August themed boat parade, and teams that raise $5,000 or more will have dinner delivered to their boats by sea-doo.

“It’s still gonna be a lot of fun because we’re giving awards for the tackiest boat and the best themed design,” Hock said, adding that the event includes a silent auction and a live auction as well. “You can come out safely and see all the different people and understand what’s going on and raise money for a great cause.”

Canadian singer-songwriter Trevor Guthrie has been participating in the boat rallies for years. His family has a property on Lake Rosseau and they’ve been attending the event ever since they heard about it early on in its existence.

“It’s so fun and it’s such a great cause that we just keep signing up every year,” Guthrie said.

He’s excited to support Holland Bloorview and see his fellow performers while also making his return to the stage for the first time since COVID cancellations. Though he’s excited about the music he’s been writing during the downtime, he’s thrilled to finally be back in front of an audience.

“I was lined up to be playing in Europe with Armin and some other DJs I’m working with and that all got shut down,” Guthrie said. “I’ve just not been able to perform like many other artists, so to come out to be able to perform for such a great cause and for something that I’m very familiar with, it’s a treat.”

Along with being his first time back on stage in months, it’ll be his first time performing in a concert on the water, although he’s no stranger to making music on the lakes of Muskoka.

“I shot my video for ‘Summertime’ on Lake Rosseau at the cottage and the whole thing was we wanted to have a bunch of boats out and have a concert on the lake,” he said. “It was terrible weather, so we weren’t able to do it. Now I’ll be able to realize that vision through the boat rally, so it’s going to be fun singing to boats here and there and everywhere.”

For more information on the Boat Rally for Kids, click here. Watch the video below to hear from this year’s Boat Rally Ambassador. 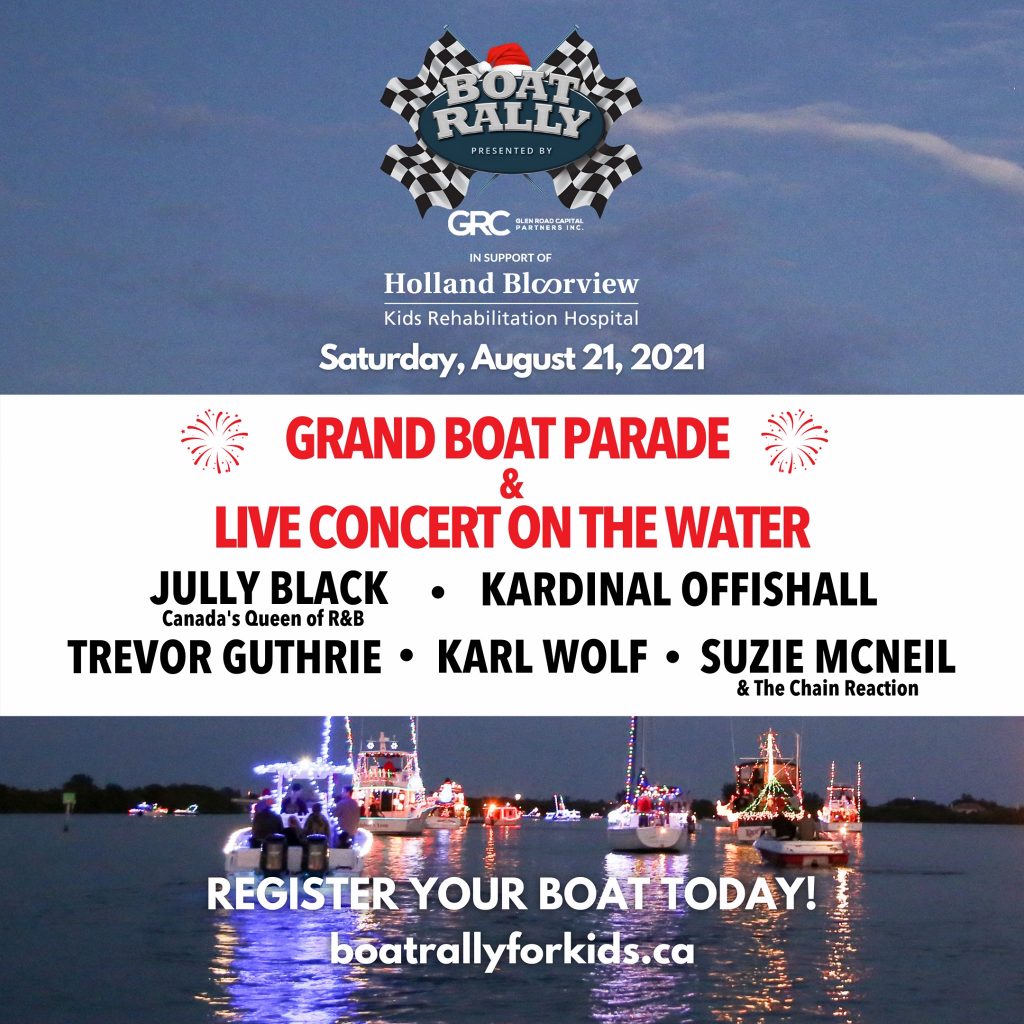