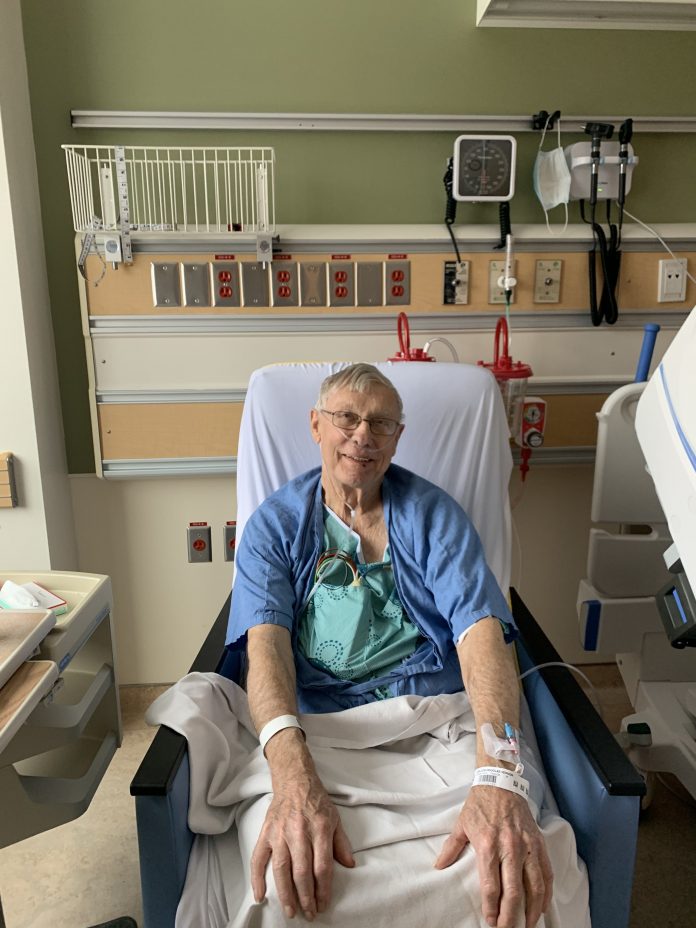 This change is the result of an important new heart attack process called the Simcoe Muskoka Code STEMI Protocol, first introduced to the county in November 2020 and rolled out to the residents in the Collingwood and Midland area in February. This phased, gradual approach to bringing the ‘gold standard’ of cardiac care to the people of Simcoe Muskoka is a partnership between RVH, the County of Simcoe Paramedic Services, Rama Paramedic Services and area hospitals. The ‘gold standard’ of care is achieved when a patient coming from a community hospital receives advanced cardiac care in less than 120 minutes from onset of symptoms.

Stayner resident Douglas Callow, 83, was the first person in the region to receive this advanced cardiac care. On the morning of February 19, after clearing off snow from his garage, Callow began experiencing chest pain.  Callow had a neighbor immediately take him to CGMH. Upon arrival he was quickly assessed by Dr. Darryl D’Costa and his team. The code STEMI protocol was followed, and Simcoe County paramedics were dispatched, and Callow was safely transported to RVH where the cardiac team was waiting for him.

Callow was very pleased with how fast things unfolded, “When I arrived at the Collingwood hospital I was seen right away. They told me I was having a heart attack and that I needed to go to RVH in Barrie. It was like a scene out of a television show. There were people everywhere caring for me,” he said. “Once I arrived at RVH, the cardiac team was expecting me and everything went very smoothly. I felt well cared for.”

Long standing ED physician, Dr. D’Costa is additionally pleased with the process. “As an ER Physician it is comforting to know that patients in our region now have rapid access to state-of-the-art cardiac care, closer to home.”

“Having these advanced cardiac services, and a highly-skilled team at RVH means that now the majority of patients in Simcoe County will be able to get lifesaving intervention within 120 minutes of a heart attack,” says Dr. Tony Lee, medical director of RVH’s Cardiac Intervention Unit. “That is great news because the faster a patient can be treated, the better the outcome. When it comes to the heart, ‘time is muscle.  This is a very important step in our safe, gradual phased approach to eventually bring timely access to 24/7 advanced cardiac care to all of North Simcoe Muskoka. This new cardiac protocol would not be possible without the full collaboration of all our health partners in this region including the extraordinary partnerships with Georgian Bay General Hospital and Collingwood General and Marine Hospital.”

RVH is well positioned to deliver advanced cardiac care. The regional heart program, a partnership with Southlake, opened in January 2018 and since then the cardiac team has completed just over 6,000 heart procedures including angiograms, angioplasty  and pacemaker implants.