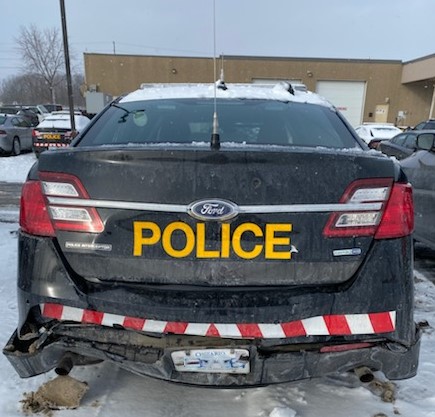 An OPP cruiser from Southern Georgian Bay OPP was struck from behind while the officer was out of the vehicle investigating a single vehicle crash on Simcoe County Road 6 between Concession Roads 6 and 8 in Tiny Township.

At 10:13 a.m. January 6, 2022 a vehicle with two occupants on Simcoe County Road 6 struck the unattended cruiser causing damage to both vehicles.

A investigation into this crash was commenced resulting in the driver Jacob Butler, 33 years of Midland being charged with:

The accused was released with a future court date.

The passenger in the vehicle Paul Baskerville 33 years of Midland was also charged with Fail to Comply with Probation Order contrary to the Criminal Code of Canada.

The accused was released from police custody on a recognizance to appear before the Ontario Court of Justice  on February 17, 2022 on this charge.

The involved vehicle has been towed and impounded for 45 days as per the Ministry of Transportation (ADLS) guidelines.