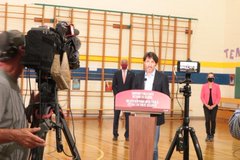 School is critical for kids’ development and future success. The COVID-19 pandemic has been difficult for families, with schools closed and students separated from their classmates and friends. As we gradually and safely restart our economy, parents should be able to return to work and trust that their children are learning in a healthy environment.

The Prime Minister, Justin Trudeau, announced up to $2 billion in support for provinces and territories through the Safe Return to Class Fund. This will provide the complementary funding they need, as they work alongside local school boards to ensure the safety of students and staff members throughout the school year. For example, the Fund will help provinces and territories by supporting adapted learning spaces, improved air ventilation, increased hand sanitation and hygiene, and purchases of personal protective equipment and cleaning supplies.

The Prime Minister also announced an additional $112 million in funding for First Nations to support community measures to ensure a safe return to school on reserves. The government will continue to work with First Nation partners to help protect the health and safety of students and staff this school year.

The funding by province and territory will be allocated based on the number of children aged between 4 and 18 years old, with a $2 million base amount provided to each jurisdiction.