Shoebox collection was put on pause in 2020 due to the pandemic, but this year, shoeboxes are back and the organizers of the Muskoka Shoebox Project are looking to collect 1,400 boxes for women across the region.

Each shoebox contains about $50 worth of gifts, such as sweets, toiletries, gift cards and cozy items like mittens or socks for women impacted by homelessness. The Shoebox Project offers a guide to creating shoeboxes, and while large gatherings are still on hold, it’s a great chance to get together with a few friends and family members to kick off the holiday season with a gesture of goodwill, said Bala resident Jennifer Stevenson. Stevenson and her daughter-in-law Sarah took on the role of organizing the local project last year, so they’re excited to collect physical shoeboxes for the first time after last year’s virtual approach.

“It brings the community together in such a different way,” Stevenson said. “The last couple of years have been a bit of a challenge for people all around, so this is pretty exciting.”

Stevenson and her daughter-in-law were longtime supporters of the Muskoka Shoebox Project before becoming organizers. They hosted shoebox parties for years and it was during a donation drop-off that Stevenson realized the full extent of the local efforts. Joanne Buie, Penny Burns and Barb Baldwin were still serving as organizers for the event when Stevenson saw the warehouse with hundreds of shoeboxes inside.

The agencies that receive and distribute the shoeboxes have expressed increased need this year, Stevenson said, but she’s optimistic about reaching their goal of 1,400 based on last year’s success. Even with the limitations of hosting a virtual event, they were able to give out more than 1,000 gifts to local women in need.

Christmas can be a lonely and difficult time for some people, Stevenson said, particularly for women who are displaced from their homes or estranged from their families. The Shoebox Project helps remind them that someone out there cares.

“Every box counts, and the effort people put towards doing a shoebox, whether they make one or 10, they all make a huge difference,” Stevenson said. “They go to somebody in need and it’s really something special, especially at Christmas.”

For people who don’t have the time or resources to put together a physical shoebox, creating a virtual shoebox is still an option. Donors can go online and select items to put in a virtual shoebox, which generates a monetary donation for the Shoebox Project.

Those interested in contributing can also donate money, gift cards or even single items like mittens or hats, which help to top up shoeboxes and make all the gifts equal for the women receiving them. Every donation, big and small, helps support the community and the women in it.

“This is a great community and it’s very generous,” Stevenson said. “People look after each other and we want to be part of that.”

They will be accepting donations until Dec. 1 and starting on Nov. 1, drop-off receptacles will be available at the following locations: 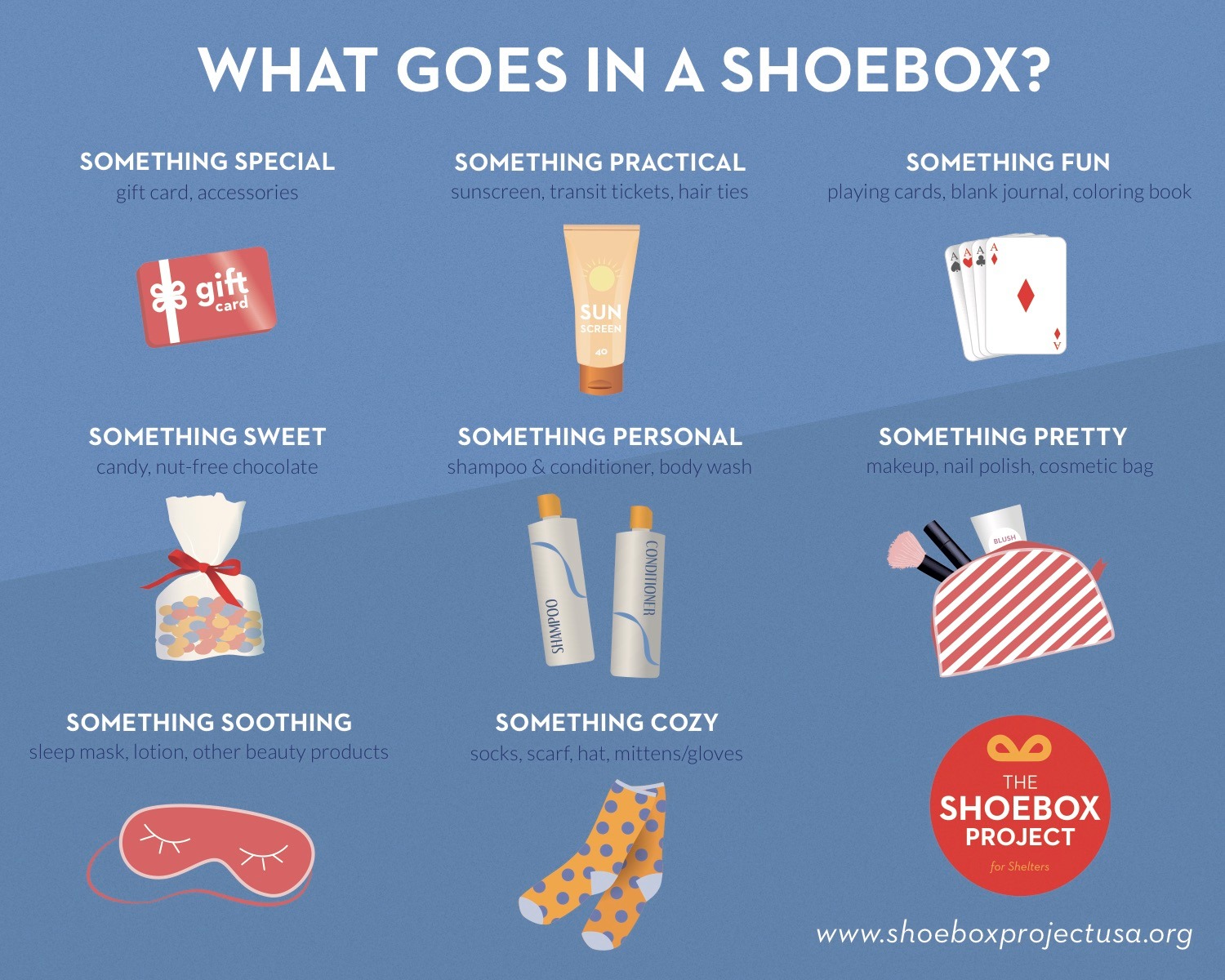