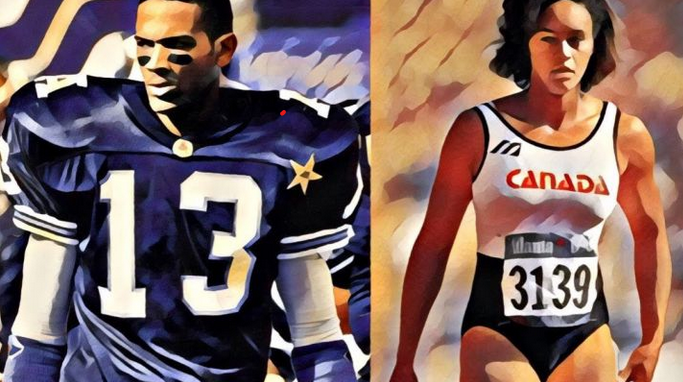 On the outside of the A.J. LaRue Community Centre in the County of Haliburton are five murals painted to celebrate the achievements of local sports heroes, National Hockey League (NHL) players Ron Stackhouse (1970’s and 1980’s), Bernie Nicholls (1980’s and 1990’s), Cody Hodgson (2010’s), and Matt Duchene (2010’s and 2020’s); as well as Canadian Football League (CFL) player Mike Bradley (2000’s). However, two local athletes are missing from the wall.

Following significant advocacy efforts from a group of Grade 7 and 8 students from J.D. Hodgson Elementary School (JDHES), a community fundraising effort is underway so that these two athletes, local brother and sister duo, 1996 Olympian Lesley Tashlin and CFL player Taly Williams (1990’s) can be represented as murals on the community centre wall.

In February of this year, while JDHES was celebrating Black History Month, Marina Thomazo’s Grade 7 and 8 French Immersion Class noticed and questioned why Lesley Tashlin and Taly Williams were omitted from the local Haliburton “wall of sports heroes”. Following initial research, the students determined they wanted to do something to get these athletes’ accomplishments recognized.

The class embarked on a journey to have the local athletes included on the mural wall through a number of efforts. Students sent letters to the Municipality of Dysart et al Town Council, requesting more information about the process for recognition on the wall, resulting in discussion at the March Town Council Meeting. The Town Council called on the Cultural Resources Committee to look into the matter further, and a Working Group was created to determine criteria and processes for recognizing local athletics excellence on the arena wall. JDH students and a teacher rep, Mike van den Hengel were a part of the Working Group.

A social media campaign, #HerTrackHisField has been created, where the students posed in front of the arena wall where they would like to see murals of Tashlin and Williams. The campaign quickly spread on Instagram and Twitter social media channels, and even included a promotion through Athletics Canada and by Williams himself.

The class’s endeavour received local media attention, as well as a number of letters of support from Trillium Lakelands District School Board Trustee Gary Brohman, the University of Waterloo Football Club, of which Williams is an alumni, and even from Pinball Clemons, who who was a teammate of Taly’s on the Toronto Argonauts.

The students’ efforts did not go unnoticed and eventually received the Council’s approval in June 2021. To learn more about fundraising efforts, see the GoFundMe page, or visit the Municipality of Dysart et al Mural Wall of Sport Heros page.

“I feel extremely proud of my students, they have shown passion, leadership, resilience, great researching skills, tenacity, and determination,” said Grade 7/8 JDH French Immersion and Core French Teacher Marina Thomazo. “As adults, it gives us so much hope for the future to see children standing up for what is right and witnessing their voices being heard. It inspires us all as well to get involved and be better citizens.”