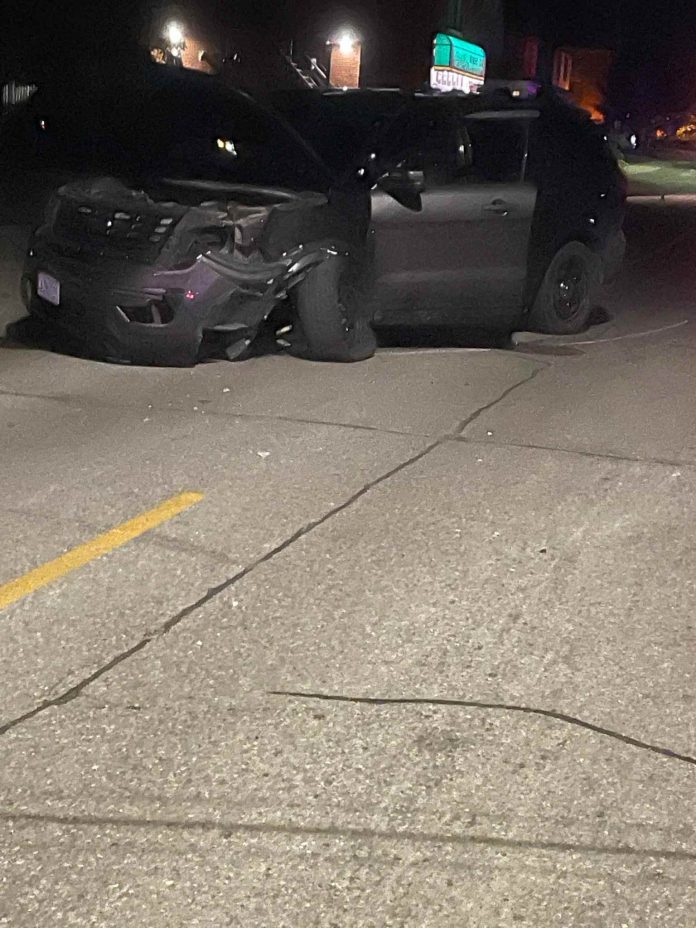 A collision between a police cruiser and a passenger vehicle has resulted in minor injuries to both drivers, extensive damage to vehicles as well as Criminal Code and Liquor License Act charges.

On August 20, 2022 at 10 p.m. an unmarked police cruiser was travelling to a call for service and indicated to turn left on Yonge Street in Midland. A passenger vehicle behind the cruiser attempted to pass at the same time and struck the police cruiser, causing extensive damage to both vehicles.

The collision has resulted in minor injuries to the drivers of both cars, they were assessed and treated at hospital and have been released. A passenger in the vehicle was unharmed.

During the investigation, police gathered evidence which led them to believe that the driver of the passenger vehicle was impaired by alcohol. A demand was made to the male to provide a breath sample into a screening device however he refused.

The streets in the area of the collision were closed for a period of time so the scene could be examined by members of the OPP Central Region Technical Traffic Collision Investigation (TTCI) unit, the area is now reopened.

As a result of this occurrence, Tyler LeClair, 41 years of Waubaushene, Ontario was arrested and charged with the offences under the Liquor License Act as well as the following Criminal Code offences:

The driver’s license of the accused has been suspended for 90 days and the vehicle was towed to be impounded for 7 days. He was released from police custody to appear before the Ontario Court of Justice in Midland on September 8, 2022