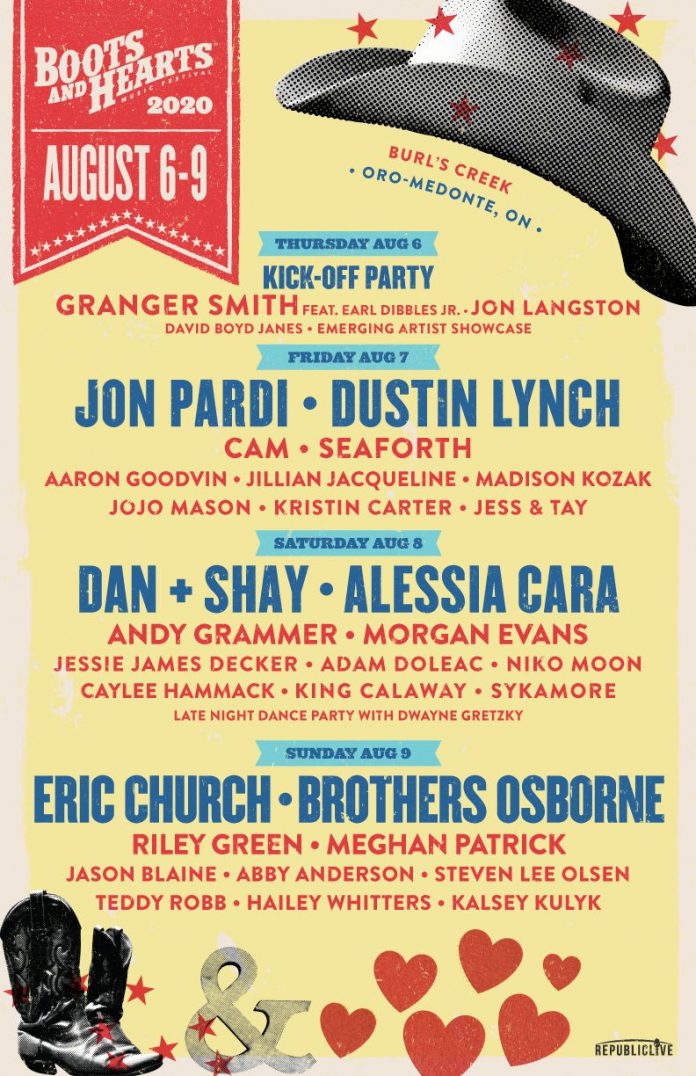 Known for his rowdy rock-country persona, Eric Church has dominated the contemporary country scene, earning praise among fans and industry alike. He’ll be closing out the festival on Sunday night with fellow rule-breakers Brothers Osborne; the siblings who are carving their own path in country music with their fan-loving big song hooks and loud guitars.

Making their Boots and Hearts debuts are Friday night co-headliners Jon Pardi and Dustin Lynch. Consistently scoring industry recognition, Dustin Lynch has had over a billion music streams while Jon Pardi, a fast-rising country superstar and one of the festival’s most fan-requested artists will have the crowd ‘Head over Boots’ right out the gate.

Saturday night headliners Dan + Shay are making their third appearance at the festival. The two-time Grammy award-winning country pop crossover duo debuted their first ever Canadian performance at Boots and Hearts 2014, and returned in 2017. Opening for Dan + Shay will be fellow Grammy winner, Alessia Cara. The 2020 Junos host and top award nominee will bring her small-town Canadian charm and big voice to fans for her first appearance at Boots and Hearts.

“In today’s music landscape, fans are exposed to multi-genre playlists and cross-genre singles as a means to discover new artists,” said Eva Dunford, Co-Founder. “We are proud to have pop powerhouse Alessia Cara, one of Canada’s top female artists, share the main stage with award winning duo Dan + Shay, whose recent singles have been both country and pop chart-toppers.”

Fans can stay up-to-date by downloading the Boots and Hearts app to explore the 2020 lineup and be the first to know about all festival news before and during the event.