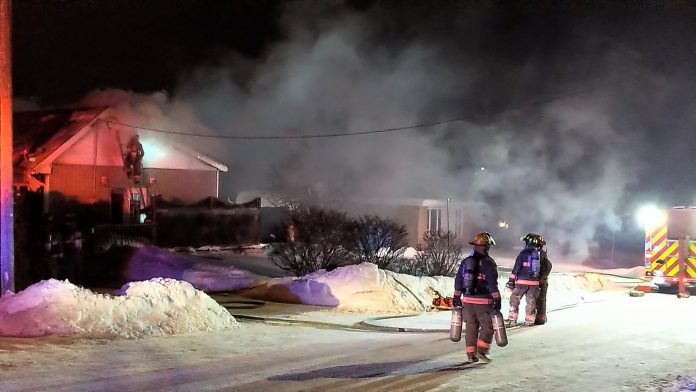 On Thursday January 28, 2021 at 7:25 p.m, Orillia Fire, OPP and Paramedics responded to an address on Jameson Street in Orillia to reports of a structure fire.

When crews arrived, they found smoke and flames coming from the rear of the home that quickly spread to the attic.

A neighbor is being credited with assisting two people that were in the home to safety outside. The two people were transported by Paramedics to hospital for smoke inhalation, but have since been released.

Orillia Fire Chief Brent Thomas tells Muskoka411 at the height of the fire there were 16 firefighters on scene with 4 trucks.  Cold weather and icy conditions made it a challenge for crews to battle the blaze that was brought under control at 8:45 p.m.

“We want to remind residents to check their smoke and CO alarms. Also have two ways out of your home. Disabling an exit to maintain warmth is not recommended ever.” Said Orillia Fire Chief Brent Thomas

The Ontario Fire Marshal has been called in to investigate the cause with the damage being estimated at $600,000. Crews were on scene until 2 a.m.

#BREAKING
House fire in. Orillia with smoke and flames at the rear when crews arrived
A witness said all people and pets made it out safe pic.twitter.com/w9mzTV2hxD