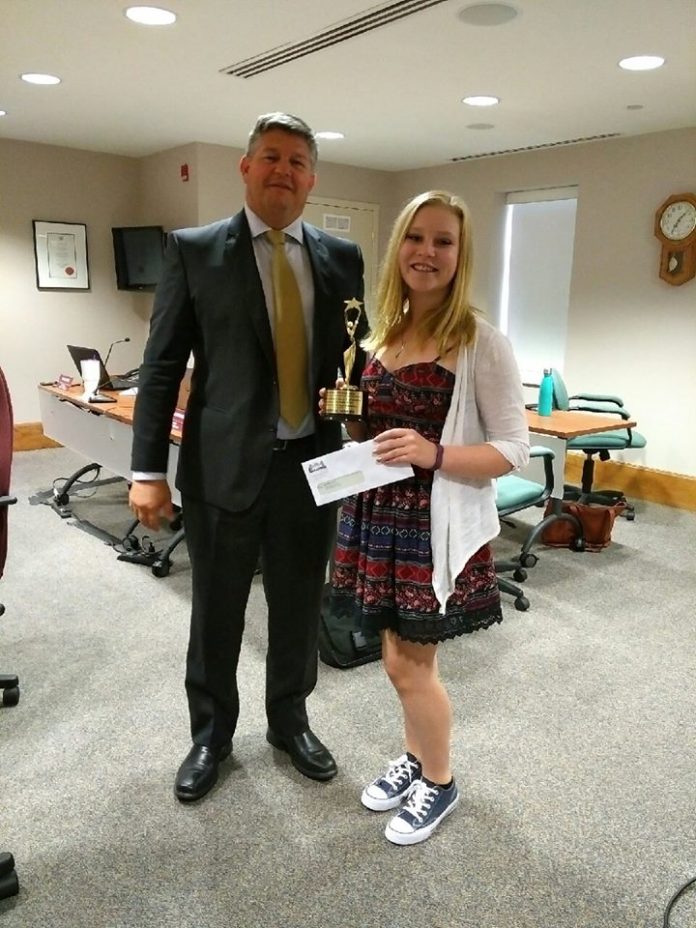 The Town of Huntsville is happy to announce that “The Bill” 2017 recipient is Briar Summers. The Bill, presented by Mayor Scott Aitchison at Council on August 27, 2018, is an annual award to a local performing artist based on the applicant’s work submitted to a jury. The award is open to individuals. Applicants can be any age, at any stage of their career, working in any genre, provided they have a local address. This is the second presentation of “The Bill” annual award. The 2016 inaugural winner, announced August 2017, was Jamie Bestwick.

Huntsville enjoys a rich history of musicians and performing artists. Mayor Aitchison, in congratulating Ms. Summers, said, “It is rewarding to acknowledge exemplary youth achievement in the arts in our community. Briar, you certainly have earned this recognition. I understand that you and I are to appear together on the Town Hall Steps for the Culture Days 2018 opening ceremony on Friday September 28 at noon. I invite everyone to join us.”

The Bill award honours entertainment visionary and hospitality ambassador Maurice Willard “Bill” Waterhouse, 1935-2015, long-time owner and operator of Deerhurst Resort. Bill was an avid supporter of live entertainment. Among his most notable ventures were end-of-summer concerts for teens held at Hidden Valley Ski Hill in the 1960s, The Second City Touring Company at Deerhurst’s Four Winds Disco in the late 1970s, and production of Deerhurst’s acclaimed live stage shows starting in 1980, which continued uninterrupted to 2016.

“It’s so nice to be recognized in my community and to have my hard work acknowledged,” says Summers. “I’m in grade 8 Royal Conservatory classical piano, play alto sax in several school bands, competitive dance 4 to 5 days a week, figure skating, and that’s on top of other things that come up (like playing the villain in Huntsville High School’s “Rock of Ages” last fall) – and schoolwork of course! I’m so happy that the jury sees my musical potential and my dream of pursuing the performing arts as a career. Winning ‘The Bill’ award inspires me, and helps keep me going! I have many people to thank:  All my performing arts teachers at Huntsville High School, piano teachers Frank Berg and Sarah Spring, my music coaches over the years Joanne Lea, Amy Bridle and Sherisse Stevens, dance teachers at JJ Performing Arts Studio and the Huntsville Skating Club, my family and all my friends for their support! I feel lucky to be able to do what I love for a part-time job as a teenager, performing all around Muskoka, Orillia, Hamilton, Guelph, Waterloo and Montreal. It is pretty cool that my work is playing music: busking, playing at concerts etc., and as the accompanist at a church, and things are only getting busier for me! Mr. Waterhouse did so much for art, sports and tourism in Huntsville and helped make this town an amazing place to live and visit. I will try to honour his love of the arts through my work in music and dance in the future! I have really big plans for 2019!”

Applications for The Bill Award 2018, planned for presentation in 2019, will be available online in 2019. Previous applicants are encouraged to reapply in future years with an updated entry.