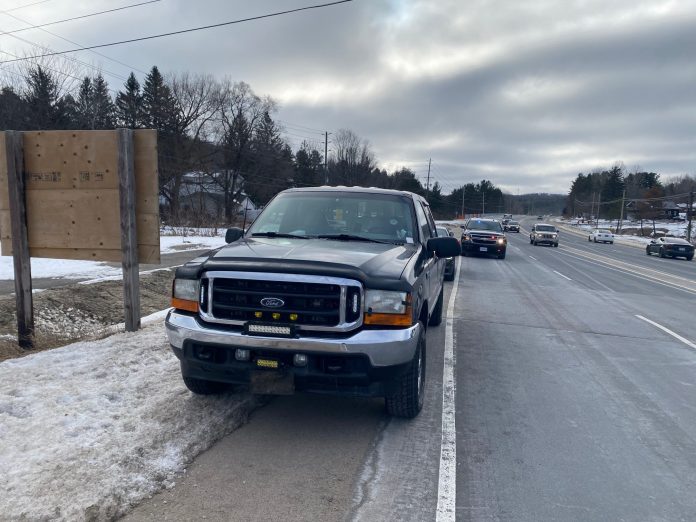 A uniform officer on patrol from the Southern Georgian Bay OPP observed a possible impaired driver west bound on Vindin Street in the Town of Midland at 9:58 a.m. on December 7, 2020. The officer attempted to stop the vehicle which then turned north bound onto Simcoe County Road 93 as the vehicle did not respond to the marked police car’s lights and siren. The suspect vehicle did stop without incident at the entrance to the Town of Penetanguishene and a number of marked OPP cruisers attended the scene blocking a north bound lane to provide safety for the officers assisting in the investigation.

The officer spoke with the driver who exhibited signs of impairment and requested the assistance of a Drug Recognition Officer (DRE) to conduct an impaired driving by drug investigation. The officers at the scene also noted street drugs in the vehicle and requested the OPP Central Region K-9 Unit to attend to assist in a vehicle search for drugs.

As a result of this investigation the driver of the vehicle Ryan Witheridge, 36 years old from Penetanguishene, has been charged with the following drug and driving related offences:

The accused was released from police custody on a recognizance to appear in Midland Court on December 17, 2020. The involved vehicle was towed and impounded for 7 days and the accused’s driver’s licence has been suspended for 90 days under the conditions of the Administrative Drivers Licence Suspension (ADLS) .

Two other occupants in the vehicle were also charged in the investigation as follows.

Cheryne Roote, 28 years old from Christian Island, was charged with:

The accused was held in custody to appear before a video bail hearing and will appear in Midland Court at a future date.

The second passenger Warren Edwards, 37 years old from Tay Township, was also charged in this investigation with:

The accused was released from police custody on a recognizance to appear before in Midland Court on January 14, 2021.