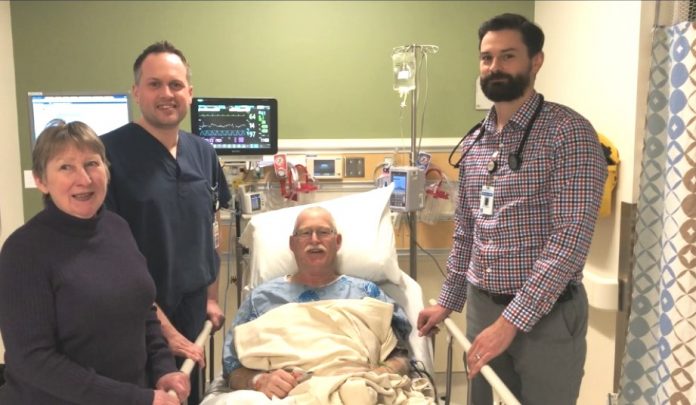 Brian Sills had the honour of being ‘patient 1,000’ and after his successful angiogram he commented on the treatment he received.

“Everything runs so smoothly here, right from the very start people have been kind and happy which makes a big difference when you are facing a scary situation,” says the 61-year-old resident of Penetanguishene. “The team here was so professional while at the same time compassionate and understanding. Not only was I ‘patient 1,000’ I also received very good news today – an early Merry Christmas from the cardiac team.”

In early January, RVH celebrated their historic first angiogram. The program – a partnership with Southlake Regional Health Centre – then expanded in September to include more advanced cardiac procedures such as angioplasty, stenting, fractional flow reserve and optical coherence tomography.

“The milestone we are celebrating today is yet another move forward as we gradually ramp-up services over the next few years. In early 2019, we will start accepting stable inpatients from other hospitals in the region and in 2020, the heart program will operate 24/7 and paramedics will begin transporting North Simcoe Muskoka heart attack patients directly to RVH for treatment, bypassing other local emergency departments,” explains Dr. Mark Kotowycz, medical director of the Cardiac Intervention Unit.

Just this October the program expanded yet again and welcomed a second interventional cardiologist, Dr. Tony Lee. Dr. Lee hails from Toronto and for the past seven years has been practicing at Queen Elizabeth II Health Sciences Centre in Halifax, Nova Scotia.

“Having these advanced cardiac services, including a highly-skilled team, now available at RVH means that most patients in North Simcoe Muskoka will be able to get lifesaving intervention, closer to home, within 90 minutes of a heart attack,” says Dr. Kotowycz.

Photo – Dr. Mark Kotowycz (left), interventional cardiologist and medical director of the Cardiac Intervention Unit, and Dr. Stephen Pizzale (right), cardiologist and medical director of the Cardiovascular Program, with the Simcoe Muskoka Regional Heart Program at RVH, congratulate Brian Sills, from Penetanguishene, along with his wife Andrea, on being the program’s thousandth patient and on the good health news he received following his angiogram. (Donna Danyluk Photo)