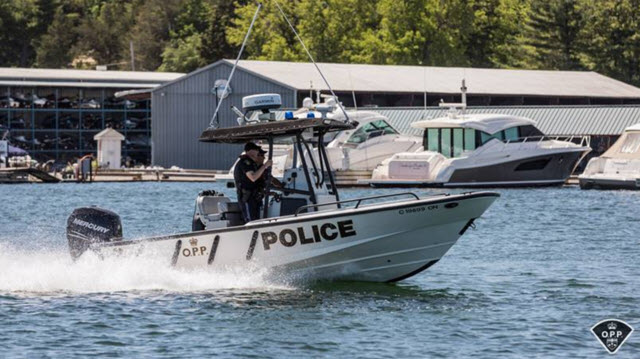 Marine officers from the Southern Georgian Bay OPP were on patrol checking vessels and operators for equipment and impairment focusing on Giants Tomb and Beckwith Island areas along with patrols of Six Mile Lake, Gloucester Pool and the Trent System over the August 1-7, 2022 time period.

Officers issued three tickets for liquor violations and four tickets for a mariners not having sufficient lifejackets on their vessel. During the officers patrols, 62 vessels and their operators were checked for equipment and sobriety during their 61.5 hours of patrol. 5 operators were warned for  Canada Shipping Act violations various other boating related offences.

Numerous investigations were also conducted as the officers responded to 24 calls for service on numerous bodies of water located within the Detachment patrol area.

Officers conducted an equipment check on a 30′ Sea Ray vessel just south of Giants Tomb Island with four persons aboard and pets returning from the Beckwith Island area. The officers spoke with the vessel operator and entered into a drinking and driving investigation resulting in Richard Grotsch 46 years of Severn Township being charged criminally with Operation while impaired – blood alcohol concentration (80 plus).

The accused was released from custody on a recognizance to appear before the Ontario Court of Justice on August 18, 2022 as well, the accused has lost his driving privileges for 7 days as a result of a Ministry of Transportation ADLS suspension.