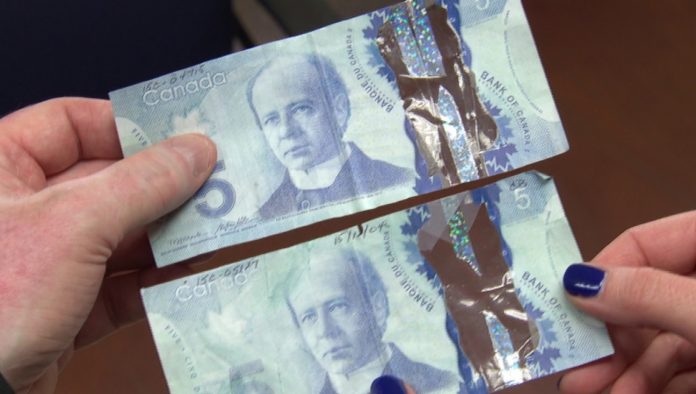 Police are warning Ontario residents of counterfeit currency making the rounds, which can leave consumers and vendors as victims in its wake.

Since the beginning of 2017, OPP have received 82 reports of counterfeit bills in its West Region alone, ranging in value from 5-dollar to 100-dollar bills in Canadian and United States banknotes.

The OPP is partnering with the Bank of Canada and the RCMP to educate citizens and business owners about how to spot counterfeit currency and what to do when they encounter fake cash. The RCMP reports 17,504 counterfeit Canadian banknotes passed in 2016 – 3,934 of those (roughly 22%) were passed in Ontario.

When dealing with someone who is attempting to pass counterfeit bank notes, cash handlers must ensure their own safety first. Here are some things you can look for:

Even with new technology, no counterfeiter is able to produce an exact duplicate of a genuine bank note – a counterfeit is always an inferior copy of the original. At first glance, a good counterfeit looks like ‘the real deal.’ But if you know what to look for – and feel for – it only takes a few seconds to detect a fake. Read more about Canadian bank note security features at the Bank of Canada website.

Possession, use or creation of counterfeit currency is an indictable offence punishable upon conviction by up to 14 years in prison.