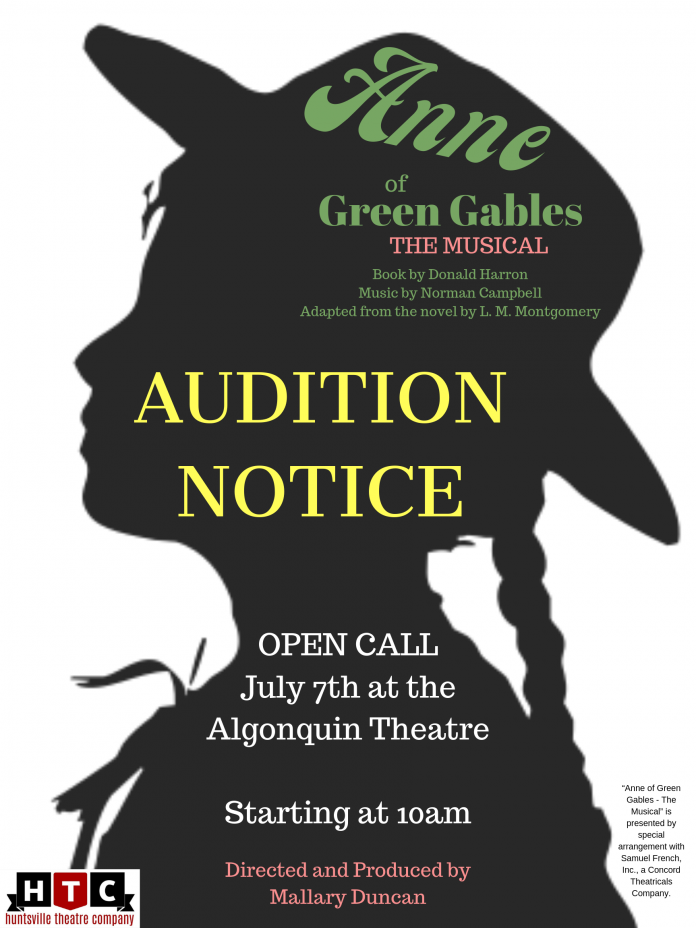 The Huntsville Theatre Company and producer Mallary Duncan are proud to announce auditions for the first show of the HTC 2019/2020 season ‘Anne of Green Gables – The Musical’.

Based on L.M Montgomery’s timeless classic, ‘Anne of Green Gables – The Musical’ follows Anne Shirley, a feisty, red-haired orphan who arrives in the small community of Avonlea to the surprise of the Cuthberts, who were expecting a boy. The story follows the precocious and imaginative Anne as she captures the hearts and minds of the small community – and her new-found family – simply by the virtue of her own pluck and personality.

‘Anne of Green Gables- The Musical’ will be performed October 3rd-6th, 2019 at the Algonquin Theatre with rehearsals beginning July 21st on Sundays and Wednesdays. With a cast of almost 30 and limitless ensemble opportunities, we encourage everyone (ages 10+) to come out to audition!

Director and Producer Mallary Duncan has said she is excited to partner with the HTC to present their first full-scale musical at the Algonquin Theatre.

“Musical theatre is my passion and I am thrilled to direct Canada’s longest running musical on the Algonquin Theatre stage. With beautiful music, joyful dancing and a heart-warming story about being yourself; ‘Anne’ is a show for all ages. I hope to see everyone in our talented community come out to be a part of this adventure! Life is better with music and there can never be too much of it in our lives”

HTC invites anyone interested in participating in ‘Anne of Green Gables: The Musical’ to open auditions. Bring a short song to sing and be prepared to do some choreography. Open auditions will be held at the Algonquin Theatre from 10am-1pm on Sunday July 7th, 2019. Visit the HTC website www.huntsvilletheatre.org for updates and information or email production manager Mark Rodrigues producer@huntsvilletheatre.org.