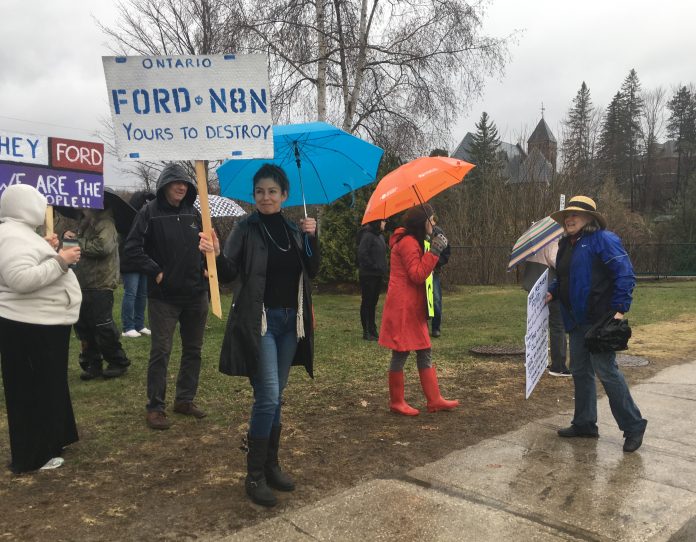 Muskoka residents in Huntsville and Gravenhurst joined community members across the province on May 1 in a general strike against Doug Ford’s government and the recents cuts announced for provincial programs.

The province-wide event was organized by Dakota Lanktree and Florence O’Connell. Lanktree is a documentary film-maker from Hamilton while O’Connell operates a housekeeping business in Toronto. The purpose of the general strike against Ford was to stop “the current agenda being played out in Ontario” and remind Doug Ford who he works for, according to a statement from the organizers. Groups in at least 26 communities across Ontario, including Huntsville and Gravenhurst, participated in the protest, while solidarity events also happened in communities such as Orillia, Barrie and North Bay. It’s also no accident that the event is happening on International Worker’s Day, according to the organizers.

“What’s most important in this, to my mind, is that the people of Ontario realize that they do not need permission to stand up and say that they’re not going to take it,” Lanktree said in a statement. “We’ll call it a success if it furthers the overall opposition to these dangerous and poorly researched cuts that we’ve seen from the Ford government, and it’s our hope that this being a people-led movement will also send a message to the unions that we stand with them when they move.”

Peggy Peterson organized the Huntsville portion of the general strike, which hosted a couple dozen locals at Riverside Park near downtown. Peterson believes in taking back 10 per cent from those on the Sunshine List, a list that shows public sector employees who are paid $100,000 or more annually, to fund the government.

“Ten percent clawback, [Ford] can do that. It’s easy paperwork and no job losses,” Peterson said. “It takes back a bit of the power with that because we have to remind the government that they work for us, they represent us. The only reason they exist is to provide the essential services like health care and education. That’s why we created government many years ago. We have to go back to that.”

Peterson said the group behind the event is also organizing a petition to garner further support for their goals. She hopes the general strike will draw attention to important local issues like infrastructure and healthcare.

Erin Horvath, NDP candidate for the Parry-Sound in the last provincial election, attended the strike in Huntsville and said it’s important for Norm Miller, Doug Ford and others in the government to understand that many people are not happy and feel unrepresented in recent decisions. Many people are trying to reach Miller to have a conversation, she said, and have received no response.

“This province-wide strike I think is really good evidence that people are not unanimously thrilled with what’s going on,” Horvath said. “We need to step back and I would say to Norm, you need to step back with your people. The allegiance needs to be with Parry Sound-Muskoka first.”

Horvath also commented on the recent provincial rebranding, saying that it’s frivolous to spend money on bolstering Ontario’s image in the face of so many governmental cuts.

“Don’t spend money on rebranding a logo when you’re going to be telling families that they’ve lost their employment,” she said. “Jobs in the education sector, in the healthcare sector, those are all jobs. You can’t say you’re growing the economy when you’re cutting essential jobs that are important for growth as a whole.”

Horvath said she hopes that constituents will understand that the movement is not just about anger and discontent but also about a way to find a solution.

“People are coming together to create a positive, progressive alternative vision for how to grow Parry Sound-Muskoka,” she said. “One that’s green, one that looks at people, planet and profits together.”