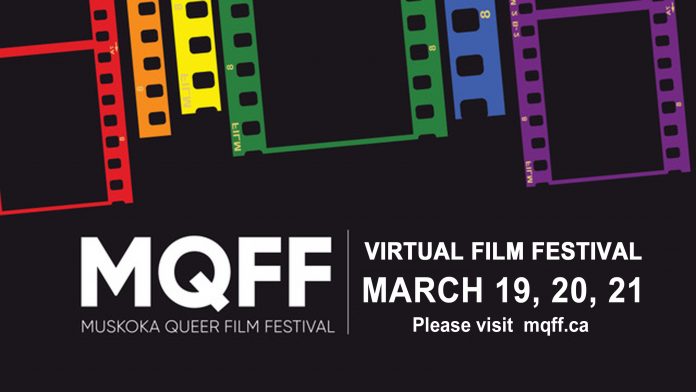 The Muskoka Queer Film Festival (MQFF) Committee is proud to announce the lineup for the second annual film festival, which will be taking place online again this year.

The First MQFF had to be postponed in March 2020 and re-envisioned as a virtual festival a few months later due to the pandemic. From the initial planning stages, the 2021 festival was planned to be a virtual event.

MQFF will present 19 films celebrating different sides of queer life, produced both in Canada and internationally including the United States, France, Australia, the U.K and a total of eleven countries. Each day, a live chat with directors will follow the films as part of the broadcast and will offer an opportunity for ticket holders to interact with the film makers.

“This is an exciting and ambitious project that builds on the success of last year’s festival. We’re thrilled to be showing these films to the world from Muskoka,” says Merv Taylor- Morin, President of Muskoka Pride. “It was hard to choose from all the great films submitted for selection to our festival, however, we believe we’ve created a diverse lineup of short and feature films that will resonate with the people who tune in to see them.”

He adds that while disappointed the film festival can’t be live and in person, this is an opportunity to build on the success of the 2020 online festival, which had 300 attendees over the weekend.

Tickets are available on Eventbrite on a “Pay What You Can” basis with a recommended donation of $25. Ticket holders will be emailed access information to a private Facebook Group for the broadcast.

Muskoka Queer Film Festival will also honor directors with two awards. The Festival Favourite will be selected by the MQFF jury while the Audience Choice award will be voted on by festival-goers online.

Michelle Emson and Olena Semenova of Sanctuary Studios, a multi-media production company based in Muskoka, are also international human rights activists and filmmakers and were integral to making the online presence of the Festival a reality.

“In these times of isolation, we understand how important it is to stay together united by common views and sharing common values. We are happy to apply our technical skills and make Muskoka Queer Film Festival happen despite all the odds and to be available for everyone regardless of their sexual orientation, gender identity, or place of residence. We welcome everyone to join us online and share the festival atmosphere of an historic event for Muskoka”, says Emson.

The films selected for MQFF 2021 are: Abomination, Baby Lies Truthfully, Brighton, Christian in the Closet, First Love, Freed, The Fly of Starling, Landing, Lilies, Lines, The Man in the Dress, Marry Me However, Queer Isolation, Rainbow Voices of Aotearoa, Roadkill, Sunday, The Tears Thing, Transkids, and 62-84 I Didn’t Copy That HQ

For details about the films and to purchase tickets to join the Festival online please visit mqff.ca

While the festival can be viewed on any device, we strongly recommend the use of a computer for the interactive segment with the Directors and for discussing the films as they play.

The Muskoka Queer Film Festival is a collaboration of Muskoka Pride, and Sanctuary Studios Inc., and is sponsored by the Canadian Experiences Fund delivered through FedNor.