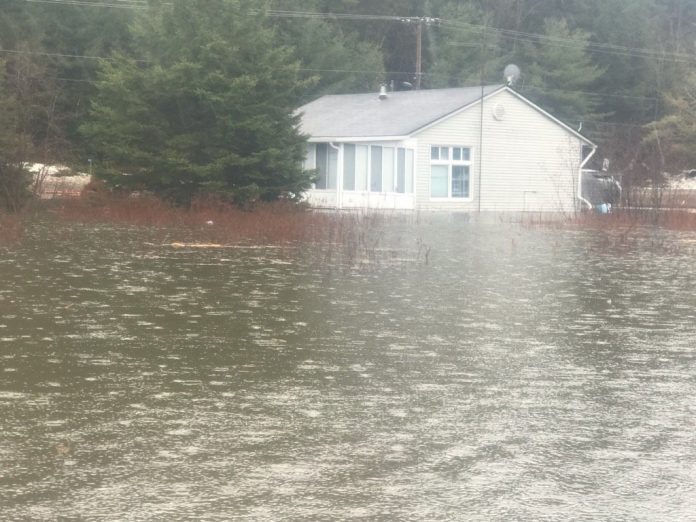 The Ministry of Natural Resources and Forestry – Parry Sound District is advising area residents that a Flood Warning is in effect in the District, which includes the District Municipality of Muskoka, the Territorial District of Parry Sound and a north-west portion of the County of Haliburton, until Wednesday, April 24, 2019.
Water levels and flows in local lakes and river will remain high following significant snow melt and rainfall that moved across the area.
Residents and those visiting the area are advised to be aware of current watershed conditions. Higher than normal water levels and flow conditions, typical of this time of year, exist throughout the area and residents are reminded to keep a close watch on weather conditions, regularly check for updated messages and exercise caution near fast-moving rivers and streams.
It is expected that lower-lying portions of known flood-prone roads along river courses will be impacted to various degrees as lake/river levels increase over the weekend and into next week.
Banks and shorelines adjacent to water bodies are extremely slippery and unstable. Residents and visitors should exercise caution while around water bodies and maintain close supervision of children and pets.
Residents that may be affected by high water conditions should take necessary action to protect/secure any vulnerable property in proximity to rivers and lakes and closely monitor developing conditions.
The ministry is closely monitoring the weather and developing watershed conditions. Further updates will be issued as appropriate.

Description of Weather System
A Colorado low merging with a Texas low moved in to the province over the last couple days bringing significant precipitation, mostly in the form of rain.

Daytime high temperatures are forecast in the 5 to 15 degree Celsius in the area. Night-time low temperatures are largely forecast to remain at or above 0 degrees Celsius in the area.
Approximately 30-40mm of rain fell across the MNRF Parry Sound District in the last 24 hours with another 10mm forecast for Saturday.
Mid-April snow surveys show a continuing snowpack ranging from 100 to 200 mm of snow water equivalent in central Ontario. These values are above average to well above average for this time of year.

Current lake levels and river flows will continue to rise with the significant precipitation and warmer weather we have received over the last week. Snow remains throughout the district with mid-April snow depths ranging from 22-54cm and snow water content ranging from 87-189mm. Lake and river levels are expected to increase significantly due to runoff from the recent precipitation and from snow melt over the weekend and into next week.

DEFINITIONS
• WATERSHED CONDITIONS STATEMENT – FLOOD OUTLOOK: gives early notice of the potential for flooding based on weather forecasts calling for heavy rain, snow melt, high winds or other conditions
• WATERSHED CONDITIONS STATEMENT – WATER SAFETY: indicates that high flows, melting ice or other factors could be dangerous for such users as boaters, anglers and swimmers but flooding is not expected.
• FLOOD WATCH: potential for flooding exists within specific watercourses and municipalities • FLOOD WARNING: flooding is imminent or occurring within specific watercourses and municipalities.

Towns are offering sand bags. Many roads have been washed out.