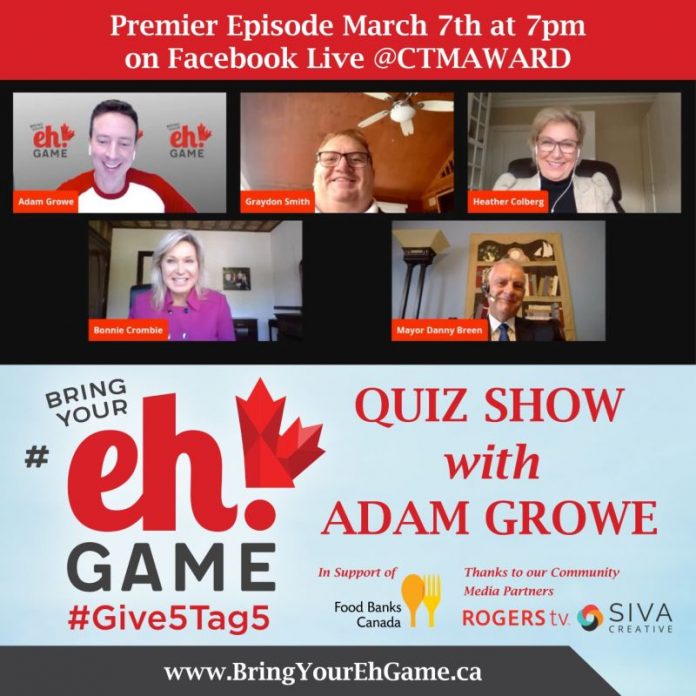 The virtual web series will be live streamed weekly on social media and Rogers community TV stations across Canada.  The premier episode will be live on Facebook @CTMAWARD March 7th at 7 p.m. 2021. The #Mayorsfoodbankchallenge will feature Canada’s Top Mayor Award nominees from coast to coast to coast including St. John’s NL, Mississauga ON, Halifax NS, Yellowknife NWT, Orillia ON, Drumheller AB, Innisfil ON, Brampton ON, Barrie ON, Yarmouth NS, Iqaluit NVT, Bracebridge ON, Radium Hot Springs BC and many more.

Bracebridge Mayor Graydon Smith will be participating on the premier episode on March 7th.

Mayor Graydon Smith said the show is fun and helping to raise money for Food Banks Canada, which supports over 650 affiliated food banks throughout the country, including the Salvation Army in Bracebridge. Of course, if people want to support any local food bank that is great too.

“I’m thrilled to be part of this fun initiative which not only highlights many amazing communities in Canada but is also raising funds for the #mayorsfoodbankchallenge. I encourage everyone to support this initiative and their local food banks which have been relied upon heavily during the pandemic.” said Bracebridge Mayor Graydon Smith.

Mayors will bring their Eh! Game in a collaborative effort to raise funds.  According to Food Banks Canada, “Before COVID-19, food banks across Canada were already seeing over one million visits each month. With food donations decreasing, grocery bills increasing, and reduced volunteers, financial support of food banks continues to be needed to ensure that food gets into the hands of people in need.”

Orillia Mayor Steve Clarke said he commends the organizers for finding a fun way to raise awareness and money for the Food Banks Canada and our local food bank – The Sharing Place.

“Unfortunately food insecurity is a significant issue, at the best of times but this is even more true during the pandemic with job and income precariousness, and job loss.” Said Orillia Mayor Steve Clarke “It is great to raise awareness and money and have some fun doing that.” He continued.

Show creator Dawn Mucci explains, “I was inspired by Mayors like Bonnie Crombie and Naheed Nenshi who were already doing great work in their municipalities to support their local food banks.  I wanted to amplify that effort by collaborating with Mayors and all Canadians to Bring their Eh Game on a national level to help those struggling with food insecurity.  Not only is the show fun and entertaining, we also get to learn more about Mayors and their community’s best attributes as well as the people, places, and things that make their cities and towns special.”

“I always love some good-spirited mayoral rivalry, and this was such a fun way to showcase the best our cities have to offer,” said Mississauga Mayor Bonnie Crombie. “But above all else, this is about supporting those most in need. Now, more than ever, our Food Banks need our help to ensure our most vulnerable residents don’t go hungry.”

Host Adam Growe says, “In addition to an entertaining and fun show, viewers can play along interactively with me and challenge the mayors during the show. Those who donate and score the highest points can also win cool Canadian Swag and experiences valued at over $500 dollars.” Details will be available on the broadcasts and at www.bringyourehgame.ca Future episodes are being planned to continue the fundraising efforts and feel-good vibes.  Mayors and community partners are invited to join the effort at info@Canadastopmayorsaward.com or donate directly at  https://foodbankscanada.akaraisin.com/fundraise/CanadasTopMayor