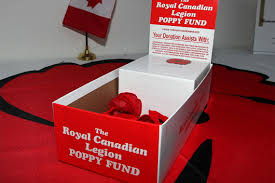 Southern Georgian Bay OPP say they were called on November 7, 2020 just after 2 pm. to reports of the theft of a Royal Canadian Legion poppy cash donation box from a Waubaushene area store.

Police were later informed that poppy boxes had also been stolen on the same day from two other Waubaushene retail stores.

A suspect was identified and in the afternoon of November 8, 2020 Jeremy Nelson Bumstead, age 46 of Tay Township was arrested and charged with Theft Under $5000 (three counts) Fail to Comply with Probation Order and Possession Property Obtained by Crime Under $5,000 (three counts)

The male will appear in court at the end of January.

Driver Charged With Refusal To Comply With Breath Demand

Driver Charged With Refusal To Comply With Breath Demand